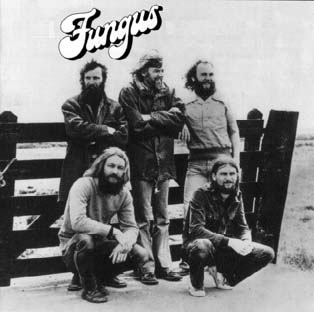 One of the numerous folk-rock bands the Netherlands has been traditionally famous for, Fungus (translated from Dutch as a sort of a mushroom) was formed in February 1972, by Fred Piek, Bob Dekenga (vocals, guitar) and Kees Maat (vocals/organ). The band initially got a lot of gigs through Fred's membership at "Cecil Sharp's Folk Library". In the beginning, Fungus played primarily English and Scottish folk music. Later, however, some Dutch songs also started showing up in their repertoire!

In 1973, Dekenga departed from the band, in order to pursue academic studies. He was replaced by Koos Pakvis and "The Fries" (Dutch province Friesland being indicative of the land of his birth).  Sido Martens (previously in Farmers Union) completed this new quartet. In 1974, this combo released their first, eponymous album on the famous Dutch label Negram. It was well received by the general public and the press alike. One year later, they followed it up with the decidedly more commercial "Lief Ende Leid" (1975), which also enjoyed very good sales.

At this point, Dekenga re-joined the group, following Martens’ departure. In the meantime, he had become a popular attraction as a solo artist in his own right. His debut album, "Land En Water" (1975) was a more varied, and yet more balanced venture than its follow up, "Pisces" (1976). After the release of Fungus’ third album, "Van De Kiel Naar De Vlaring" (1976), the group changed its musical direction, and as a result, Dekenga left for the second time. Van der Zalm’s mind was also set on leaving at that moment, however, he reconsidered and remained with the group. When Van der Graaf, then residing in Rotterdam, joined the band (his style guitar playing resembled that of Jimi Hendrix’s), Fungus shifted their focus heavily towards the English repertoire.

In retrospect, today it seems like a wrong decision. The material that followed was too dated, too sloppy and not very original, and after the release of the rather uninspired "Mushrooms" (1977), the group was reduced to a trio, in Piek, Pakvis and Van Der Zalm. They continued to enjoy steady gigs and a healthy local following, but the press reviews were getting worse and worse. The repertoire didn’t change much either, from that point on. The new material didn’t sound too rehearsed, due to the lack of time in the studio. At the end of 1978, it was all over for Fungus. The group recorded a farewell album, "De Kaarten Zijn Geschud" (1979), after which Van Der Zalm went on to join Wolverlei, while Piek formed a folk duo, The Amazing Stroopwafels. A posthumously released compilation contains two pre-war street songs, as well as several compositions of Pruis and Speenhof.

Article translated by: Louis Rentrop (uriahboz@zeelandnet.nl)
Back to Alex's Home Page
Back to the Nederpop index