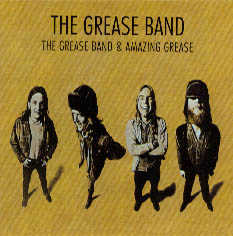 The Grease Band evolved out of Joe Cocker's Big Blues in Sheffield in 1966. They soon became Joe Cocker's backing band. After they split from Cocker in 1970, Spenner, McCullough and Rowland joined the session band for 'Jesus Christ Superstar' and played on the resulting album. Spenner and McCullough also worked briefly with Spooky Tooth but then, with the addition of Neil Hubbard (ex-Juicy Lucy), they reformed as The Grease Band in the Summer of 1975, recording one critically acclaimed album. They also toured the US a couple of times. After they split up at the end of 1971, Hubbard and Spenner played together in The Chris Stainton Band and were later in Kokomo; Rowland went on to Fairport Convention and McCullough and Weaver played together again in a later Joe Cocker Band line-up.

They reformed briefly in 1975 to record the "Amazing Grease" album and, of course, McCullough was also later in Wings and did a solo album for Dark Horse. "Laughed At The Judge" can also be heard on the "Harvest Bag" compilation.