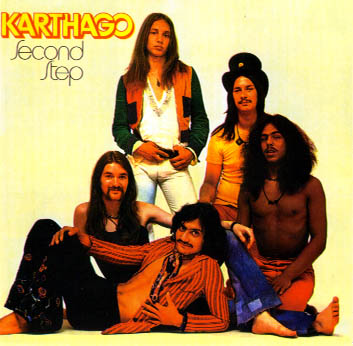 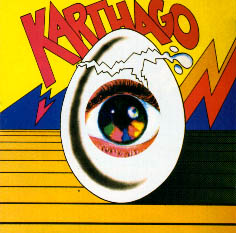 (bass). Since 1968, they had performed together in clubs as the duo Blues Machine. In 1970, they engaged the Bolivian percussionist Thomas Goldschmitt (mainly hand percussion) and soon landed a recording contract with BASF. Just a month before the recordings of their first album began, two additional members were added to their line-up: Ingo Bischof (keyboards) and Wolfgang Brock (drums). "Karthago" was recorded in October 1971 at Audio Tonstudio, Berlin with Dieter Zimmermann producing and Stan Regal engineering. It was released in a spectacular, inventive and expensive six-part fold-out cover with several die cuts! Certainly a lavish package, recalling the multi-coloured and psychedelic Santana album designs - but actually outdoing diem! Karthago's sound was graced with excellent heavy guitar work and the funky, gutsy vocals of J. Albrecht, recalling the Jimi Hendrix Experience and the heavy progressive funk band Funkadelic. The best tracks in this style were "Why Don't You Stop Buggin' Me Babe" and "String Rambler". Others, like the catchy little instrumental "Nos Vamos", had a more distinct Latin character, very much like early Santana. This is a very underrated album! Few other German bands recorded music in this particular style.

More Santana-esque instrumental work was present on "Second Step", recorded at Windrose Dumont Time, Hamburg, May 1973, with C. & M. Hudalla producing. This was much more of a joint group effort, balanced between jazzy keyboards, heavy guitars and South American rhythms. Most of the material was great, but Ingo Bischof's compositions were a bit out of place - his songs were almost singer-songwriter type of ballads! Original drummer W. Brock had left for The Rattles in February 1973 and was replaced by Norbert 'Panzer' Lehmann on this album. Then within months Lehmann departed to the heavy progressive band Epitaph. Into Karthago 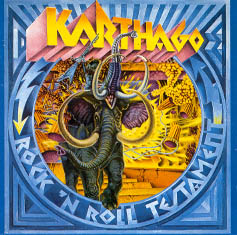 came Konstatin Bommarius (ex-2066 & Then, Abacus). The bass player Gerald Luciano Hartwig also left - in the Summer of 1974. His replacement was something of a sensation at the time - Glenn Cornick (ex-Jethro Tull, Wild Turkey) joined the band in October 1974. A revamped five-piece Karthago (now comprising Albrecht, Bischof, Cornick, Goldschmitt and Bommarius) signed with Bacillus and relocated to Oxford, England, in November 1974, where they recorded "Rock'n'Roll Testament" in the Chipping Norton Studios. The producer of this album was Peter Hauke, manager of the Bacillus label. About the same time, another of his German signings, Nine Days' Wonder, recorded in England, although his British signing Nektar recorded in Germany for years! Karthago's new album did quite well and many people consider it to be their best. It marked a change of style towards a smooth, well-produced rock with some minor symphonic 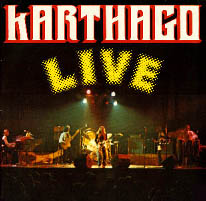 touches. Karthago had become another purveyor of the characteristic 'Bacillus rock' - a trademark of Peter Hauke and Dieter Dierks. Concerts in Berlin and Hamburg in January 1976 were recorded and released as the double album "Live At The Roxy" (1976). As Glenn Cornick had quit the group, Gerald Hartwig was now back in action again. Albrecht, Bischof and Goldschmitt were also helped by Reinhard Bopp (guitar, vocals, ex-Hardcake Special) and Ringo Funk (drums, ex-Atlantis, ex-Jeronimo). This record literally became the 'Karthago testament', as the group disbanded in the Spring of 1976. However, Albrecht later assembled Ringo Funk, Chico de los Reyes (piano, vocals), Jochen Roth (guitar) and Ernst Keinz (bass) in the studio in the Summer of 1977 for the forgettable "Love Is A Cake" - a commercial disco, pop - rock disaster!