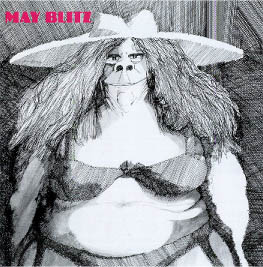 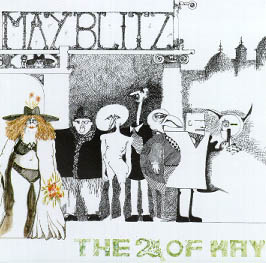 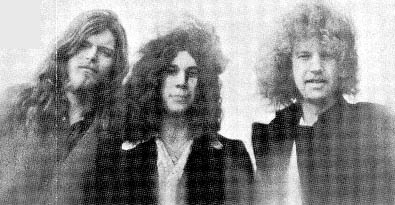 Tony Newman had previously played with Sounds Incorporated and the Jeff Beck Group. His powerhouse drumming suited this heavy rock act's loud aggressive sound, which was liberally laced with echoed feedback guitar.  The first album is the best of the two; both vinyls are highly sought-after on the collector's market.  The group was known for their heavy, blues-tinged, lumbering progressive rock style, typical of the era.  May Blitz were also featured on the Vertigo Annual 1970 compilation, playing "I Don't Know" from their debut album. Jamie Black went on to play with F.B.I. in the late '70s.

The trio's aggressive out'n'out hard rock style brought them to the attention of progressive label Vertigo Records who saw May Blitz as being in the same vein as Black Sabbath and Uriah Heep, both of whom were signed to the label.  Their debut self-titled LP (Vertigo 6360 007) was released in mid-1970 and contained seven lengthy self-composed tracks, distinguished by the use of echoed feedback guitar playing from Black.  Though not a chart success, original vinyl copies of the album complete with gatefold sleeve and Vertigo's famous 'swirl' logo, now command prices of 50 British Pounds and up on the collectors' market.  Just over six months later, in early 1971, they released their second LP, "The 2nd of May" (Vertigo 6360 037) which again came in a highly collectable gatefold sleeve.  However, the eight tracks, again, mostly written by all three members, failed to live up to the power and excitement of the first album and so shortly after its release they disbanded.

Tony Newman joined Three Man Army and appeared on the LPs, "Three Man Army" and "Two" before forming Boxer with Mike Patto and releasing "Below the Belt" and "Bloodletting" albums.  He also worked with the likes of David Bowie, Marc Bolan, Mick Ronson, Whitesnake and Chris Spedding and has remained an in-demand session musician. As for Jamie Black and Reid Hudson, it would seem they disappeared form music altogether.