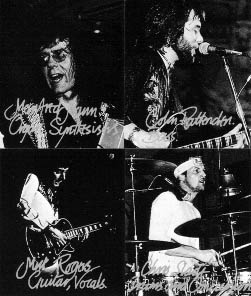 Remasters from Castle are about to see the light as well.

Mann formed this outfit in March 1972. Their first intended album, "Stepping Sideways", was scrapped although half of its intended tracks later appeared on their eponymous debut album, which attracted little attention at the time in the U.K., though it did climb to No.138 in the States, where the group enjoyed an early hit single with "Living Without You" (No.69).

"Glorified Magnified", which was full of incisive guitar riffs and frequent instrumental passages, represented a considerable advance on their debut effort. It was critically acclaimed but copies didn't shift in any considerable quantities. During 1973, they also toured the US and Europe extensively.

Their third album, "Messin'" was spearheaded by a Dylan cover, "Get Your Rocks Off", and in the US, where it climbed to No.196, this song name was used as the album title.

The first significant commercial breakthrough came when "Joybringer", which was based on "Jupiter" from Holst's "Planets Suite", took them into the Top 10. It remains a classic 45, and they were the first band granted permission by Holst's daughter to reinterpret the composer's music.

In April 1974, the group signed a new record contract with Bronze Records and rewarded them with their best album to date, "Solar Fire". Very much in the space rock mould, its highlight was yet another Dylan song, "Father Of Day, Father Of Night", which was turned into a nine-minute feast of moog and guitar riffs, superimposed by a lavish choir and melodramatic singers. In the UK, an edited version was also put out on 45. The album got to No.96 in the States.

"The Good Earth" wasn't as good as their previous two albums, though it still got to No.157 in the States, where the band had attracted quite a considerable following. The band came up with a pretty novel promotional scheme, though, whereby anybody who bought the album could remove the coupon on the inner sleeve to claim a square foot of land in Wales.

"Nightingales And Bombers" was their first album to include a cover version by emerging new US singer/songwriter Bruce Springsteen. In future years, they became notable for their Springsteen covers. The song in question on this album, the excellent "Spirits In The Night", was also put out as a 45 but failed to chart. After this album, Rogers departed to help form Aviator. He was replaced by vocalist Chris Thompson and Dave Flett on guitar.

The new line-up's first release was another Springsteen cover, "Blinded By The Light", which gave them a U.K. No.6 and a US No.1, becoming a million-seller. Another classic single, it also opened (in an extended version) their "Roaring Silence" album. In fact, it dominated the album, which also included a version of Mike Heron's "Singing The Dolphin Through" and five originals. Of these, Mann's "Waiter, There's A Yawn In My Ear", was a rather boring instrumental; whilst "The Road To Babylon" and "Starbird" utilised the 'heavenly choir' approach earlier used on "Father Of Day, Father Of Night". "This Side Of Paradise" was pretty standard progressive rock and "Questions", a soft keyboard-dominated meander. Mann had written "Starbird" and "Questions" with Chris Slade. The album got to No.10 in the U.K. (becoming their first U.K. Chart album) and in the US, giving them their only gold album.

The band lasted well beyond the time span of this book, until 1987 in fact (and has been resurrected in 1996 for the excellent comeback album, "Soft Vengeance" - ed.)

Back in 1973, they had one track, "Buddah", included on the Vertigo compilation, "Suck It And See". In 1977, a Bronze promotional compilation, "The New Bronze Age", included edited versions of "Blinded By The Light", "Father Of Day, Father Of Night", "Spirits In The Night" and "Be Not Too Hard".

Also of interest may be a four-track 12" white label promo, which previewed their "Roaring Silence" album and is now hard to track down. Whilst he was with the band, Manfred Mann wrote the music score to a film called 'Swedish Fly Girls' (Juno S-1003) 1975. The soundtrack was only released in the States.