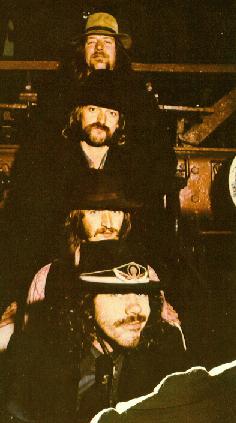 This band, founded in Eastern Holland, created their own success formula for many years to come, using a combination of rock'n'roll and regional dialect.

Musically, the band chose the style of pure rock'n'roll in the tradition of Chuck Berry and Little Richard. The lyrics, however, were sung in the regional dialect and were always about galdeejen (having fun).

The band then signed a contract with Killroy, a daughter company of Johnny Hoes' Telstar.

With the next single, "Oerend Hard", the band scored a huge hit in 1977, and repeated the feat just a few months later - with "Alie". Both songs were included on their very popular debut album, "Oerend Hard". The following singles, "Hendrik Haverkamp" and "Marie", were slightly less successful, but the live gigs were becoming the real source of their growing popularity in Holland.

In 1980, English guitarist Allan Gascoigne joined the band, and was immediately nicknamed Gaspiepe. "Hoken Is Normaal", their fourth album, was an attempt to divert from the simplest, most straight rock'n'roll arrangements, which had brought the band fame and popularity just a few years earlier. This move proved to be less than satisfying for the band, and Joly was subsequently fired; the musical direction was back to simple, straight-forward rock'n'roll. In 1982, the band scored another hit with "Mama Woar Is Mien Pils" - their most successful single since "Oerend Hard". At the end of the year, Gascoigne left Normaal, in order to start White Heat. Peter Kemper was his successor (nicknamed Kempen Paul Mealmoes), who, prior to Normaal, played in Treshold with some members of Vandenberg.

In the following years, Normaal proceeded to become of the seminal groups on the Nederpop scene. Also, on the business side of things, the band were doing just fine! By this time, they already owned their own P.A. company, a studio, own record label, and also their own trademark of Pilsener beer, Normaalbeer! It seemed like nothing could go wrong for the band at the time - not a cloud in the sky! However, following a rift with the manager, things came to a head, and it was time to share the goods and split the profits. The group lost a lot of money as a result, which forced their career to take a significant plunge. Manschot left the band, in order to be able to devote more time to his family. He was replaced by a young man by the name Fokke de Jong, who had come from a Groningen band, Catfever.

Despite all the turmoils, the popularity of the band remained virtually undamaged. Normaal had become a sort of an institution in the country, associated with many notable musical landmarks and events, namely, the Achterhoeker National anthem, the National Hokersday, and the band's own motor-cross club, just as a spin-off. The bond between the band and their fans also remained very strong. The temporary replacement of Bennie Joling by Willem Duyn (Mouth, from Mouth & MacNeal) did not afflict their popularity in the slightest. (Joling had sustained injuries in a car accident and was out of action for 6 months). In the meantime, Robert Colenbrander joined the band to fill in on Joling's rhythm guitar parts.

Joling made his comeback in 1992, but Colenbrander stayed with the band until mid-1993, when Jan Kolkman returned to the fold. This line-up headed up for Florida, USA, in 1994. There, they produced their heaviest album to date, "Gas DR Bi-J". The producer was a fellow Dutchman Erwin Musper.

The band weren't even thinking of calling it a day at this point! Imminent questions about quitting were answered by Buizen Berend, who clearly stated, "We have a meeting planned to address this issue - in the year 2000". In 1996, their twenty-first album, "Top Of The Bult" was released. There was not much new material contained on it, with the exception of John Lennon's "Baby's In Black". Once again, the album was produced by Musper, and it contained two minor hits. There was no more activity in the Normaal camp for a while, when Benny Joling decided to take a break; he was tired and depressed.

Due to the pleas and loyal endeavours of the hardcore fans, who'd do everything in order to coax their favourite band to get back together and hit the road once again, Joling decided to bring Normaal back to life.

However, the business concern "Normaal" was to be reduced to just the members of the band. Personnel and the management were fired; Joost Carlier, who had served his apprenticeship with the band as a manager in the early days, was reinstated as Normaal's manager. Their twenty-second record, "Krachtoer", was released in 1997, and half-consisted of country-rock flavoured tunes. At the same time a live album was released, containing only the material from the earliest period of the band. In the Summer of 1997, Normaal played charity gigs to benefit Dutch pig farmers.