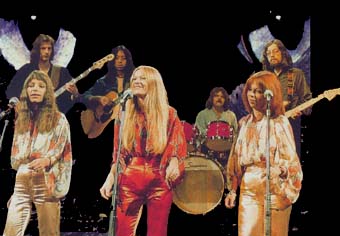 Maastricht trio, consisting of Harry Heltzel (v, g), Peter Beckers (b, v, to Opus) and Jo Robers (v, dr, replaced in 1968 by Henk Hochstenbach, later drummer in Pussycat). The group existed from 1966 to 1969. Was later expanded to include Erwin Musper (v, g, p, later in Windmill).

This Limburg group was formed in 1971 by members of Opus. They were recording their own music as well as doing session work (as a backing band for Armand). In 1977 they changed their style and their name to Partner. The line-up was: Pierre Beckers (b, v, Sharon and ex-Opus), Jo Robers (dr, v, ex-Opus, in 1974 replaced by Ab van Goor), Bert Bessems (v, g) and Erwin Musper (v, k, ex-Sharon).

Eddy Hilberts from Laren, producer of, amongst others, Neerlands Hoop and Pussycat. It is apparent from his records that he admired Cliff Richard.

Created in 1975, this Limburg group had a similar sound to Pussycat and Teach-In. Singer Gaby Denneman went solo in 1979 and was succeeded by Jutta Eichorn.

The name of Pussycat will always be connected to Toni Wille. The group from Limburg was build around the Kowalczyk-sisters, daughters of a Polish miner who migrated to the Netherlands, and had successes between 1975 and 1984, with their debut, Mississippi, as the biggest hit single. Of that song, there are about 7 million copies sold worldwide. In 1975, it didn't only became a #1 in the Netherlands, but everywhere in Europe, Australia, New Zealand and Africa it reached the same position on the charts. In South America it even was charted for 129 weeks, and in the as chauvinistic known country of Great Britain it was a #1 single.

In 1994, Toni Wille can very well remember the commotion around their debut: 'The success overwhelmed us. We were more or less knocked out by it, because we never dreamed that the debut was such a strong one. As a matter of fact, we weren't ready for it. Pussycat was a kind of a hobby for us then. For instance, I was still working then.'

The beginning was fairly innocent. The three Kowalczyk sisters Toni, Betty and Marianne began their career when they formed the "Zingende Zusjes" (Singing Sisters). Their German songs were welcomed into a willing audience, which led to a bigger area to perform. When the beat-era came, they changed their music. A female drummer came, and changed their name into "The BG's (Beat Girls) from Holland", one of the first female groups in the Netherlands. Toni even recorded her first solo single as "Sally Lane" with "Let me live my life" as the title. The first single as a group was recorded in 1973, "Tell Alain" was the song of the "Sweet Reaction". It was on the "Telstar" label owned by Johnny Hoes. It didn't sell well, but it was the first step on the road to the big success.

Early 1975 the name was changed for the last time, now into Pussycat. The group, that was formed by four men and three women, signed a contract with EMI, which let to the million seller "Mississippi". During the following 10 years 6 hit albums and 17 singles, all of them almost equally successful. The follow-up for "Mississippi", "Georgie" was a #4 in the Netherlands, and "Smile" (also in 1976) even went to #2. Both of these songs also charted in Great Britain. In the early 80's, the Kowalczyk sisters had to split from their musicians.

Toni: 'Although we started as a hobby, we had to build a professional organization due to the success of "Mississippi'. That wasn't so easy, especially when they started touring. We even went to South Africa! But after some time it came out that couldn't finance to work with that size of group. In that time it also became popular to work with a tape instead of live musicians. With pain in our heart we left our musicians.'

The success continued a few years, but in 1985 the group decided to split up. Toni: 'My sisters wanted to spent more time for themselves, and they began hating to tour with the band. We all agreed that stopping with Pussycat was the best thing to do.' For Toni it was a good opportunity to spread their wings and work on a solo-career. It resulted in the album 'Privilege', with songs that were well-chosen, and were sung with Toni's powerful and recognizable voice. Although there were many positive reactions, the album didn't chart. It was no reason for Toni to sit down after this, because two years after that, she released a second album entitled 'Working girl' and again two years later the country album 'New words to an old love song'.

The Dutch magazine "Country Gazette" awarded her in 1989 as "Best female country singer of the year". The following year had the same result, and 'New words to an old love song' became the best Country CD of that year. In 1991 she became best female singer for the third time in a row. Nowadays, Toni Wille often performs in Germany, where she's very successful with both old as new hits. She also gives concerts in Bulgaria, Slovenia and Greece. In her own country she often works with the country group "Major Dundee". Looking back on an imposing career: 'What a profession! But very fascinating!'

Especially for this album "Pussycat - The collection and more" Toni recorded the biggest hits of Pussycat, with "I'll be your woman" as her favorite, but also some new songs, like the ballads "Desperado" and "Still on my mind" and her own version of the big Elkie Brooks hit "Pearl's a singer". Toni: "A long time I didn't want to re-record that old Pussycat hits. I'm glad that I did it, the result satisfied me very much."

With "Pussycat - The Collection and more" she proves once again that she is a unique singer in the Netherlands with an international sound; solo and with Pussycat.