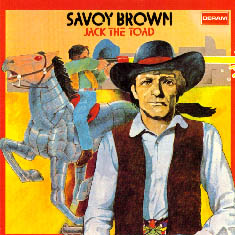 Their previous LP, and farewell for main vocalist Dave Walker, "Lion's Share" (U.K.: Decca SKL 5152, Rel.: 19th January 1973; U.S.: Parrot XPAS 71057) having made the usual progress on Billboard's Top 200 Stateside while, despite an acclaimed support tour in Britain to house-full notices, somehow avoiding our then Top 50 equivalent, Savoy Brown in the spring of '73 were assembling yet another aural assault for their worldwide legion of fans.

Already on the payroll was a singer more than capable of fulfilling Walker's previous role, British rock veteran Jackie Lynton, who by joining lead guitarist and founder-member Kim Simmonds, drummer Dave Bidwell, bassist Andy Pyle and keyboard/guitar-doubler and second vocalist Paul Raymond, had ensured the Savoyians could maintain their favoured quintet status. However, he achieved more than that. Kim Simmonds: "Previously to Jack joining the band, most of the writing was done by Paul and myself. But Jack has a wealth of his own material which is both original and fits so well with the music we play."

Resources were pooled, and for their next LP, to be named affectionately "Jack The Toad", ex-builder Lynton contributed no less than four copyrights wholly his own and joined all the other band members in scripting a fifth. Simmonds and Raymond gifted one a-piece, while the Jody Reynolds/Dolores Nance 'death' classic of the rock 'n' roll era, "Endless Sleep" - an American pop No. 5 in '58 for rockabilly singer/guitarist Reynolds whose original lost out to Britain's Marty Wilde cover this side of the big pond - and Edwin and Alvin Johnson's "Casting My Spell", completed the itinerary.

Inspiration was high, and apart from Lynton a few other innovations were introduced when they reached the studio: Kim unusually aired his larynx, taking the lead for his own "Ride On Babe"; Paul Raymond discovered the mellotron, that keyboard 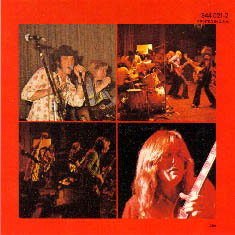 Once recording had started, however, one cloud appeared on the horizon. Trap-rattler Bidwell had for sometime had a drug problem, as his ex-employer in Chicken Shack, Stan Webb - soon to enter Savoy Brown's story himself - recollected for author Bob Brunning's informative book "Blues - The British Connection" (Blandford Press) in 1986: "Dave was a very stubborn guy indeed. I just watched him go down the pan. I mean I was having my own problems at the time: I was drinking two bottles of vodka a day."

While his old friend Webb cured his alcohol addiction, Bidwell would not be so fortunate. He left after contributing to five of "Jack's" incumbents and sadly died, another victim of the excesses of rock's lifestyle, in 1977. The aforementioned Ron Berg stepped up to finish the job, like Andy Pyle a gentleman whose C.V. showed him to have participated in the careers of both Blodwyn Pig and Juicy Lucy.

Simmonds had pledged that in 1973 Savoy Brown would tour much of Europe as well as America, but sensibly "Jack The Toad" would premiere in the land of baseball and Brooklyn Bridge for openers so a buzz existed around it. As XPAS 71059 it was pressed up mid-year and vaulted promptly into view as desired on June 30th, hopping up to 84 and setting out its stall for 14 weeks. To give a focal point to their inevitable tour, with ZZ Top, Lynton's "Coming Down Your Way" was issued as a single bearing catalogue reference Parrot 45-40075 on July 19th, a cut from "Lion's Share", Paul Raymond's "I Can't Find You", acting as the makeweight. It didn't actually trouble compilers of the Hot 100, although they were made aware of its existence as radio playlists confirmed it as an add-on, albeit in insufficient quantities.

Come August 3rd a similar coupling slipped out in Britain as Decca F 13431, prelude to the long-player's arrival on the 9th of the following month as TXS 112 - which restored the group to the deluxe album prefix and gatefold sleeve grandeur - but in spite of a nationwide pilgrimage supporting Status Quo a chart notation ensued for neither seven or twelve-inch vinyl item.

Even healthy sales from other points of the compass could not console Kim Simmonds to the fact that commercial returns didn't match crowd enthusiasm in his own country, and he was as puzzled by the phenomenon as anyone. After existing commitments were fulfilled he disbanded Savoy Brown and voiced his own frustration and boredom as the main reasons for such a drastic course of action. Yet nobody expected that simple an end to the magical saga of this enigma ensemble, and they were right. Kim took a brief sabbatical and then just before Christmas 1973 an announcement was made via advertisements in the British rock press: 'The new Savoy Brown, featuring Kim Simmonds, Stan Webb and Miller Anderson...' Many could hardly believe their eyes; as a new line-up began taking London bookings and packing the clubs they had to believe their ears. Soon a record would be available for all to treasure; tune in again soon as we bring you the "Boogie Brothers"... Although the membership of Savoy Brown had always been a somewhat unstable institution - guitarist Kim Simmonds excepted - when the latter announced in 1973 that he was finally laying the group to rest there were many glum faces among blues enthusiasts around the world.

Few believed that workaholic Kim would cease to function as a musician, but just before Christmas that term and when the Savoyians last album, "Lion's Share" (U.K.: Dacca TXS 112, Rel.: 7th September 1973; U.S.: Parrot XPAS 71059), had barely departed the American Top 200, there were numerous shocked - and delighted - aficionados who heard that a new S.B. was about to be born.

As expected, Simmonds was its leading light, but now the band would boast no less than three top-drawer axemen and frontliners with the recruitment of one-time Chicken Shack leader Stan Webb and Scot Miller Anderson.

For most of their lifetime Savoy Brown had concentrated, very successfully, on the Stateside market, but as they built their act this time around Britain benefited by receiving their early concert dates; indeed two of their five London gigs set box-office records with hundreds of fans having to be turned away as the 'House Full' notices were erected. Kim was exuberant in his press conferences: "We re-formed to create a stronger image and more forceful music. With this unit, I've already been told that I'm 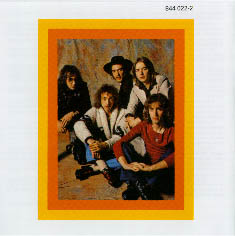 playing better than I've done for years. This is because members of the group are working for each other. The current band has possibilities that are boundless, a defined image. At last I believe Savoy Brown will achieve all the things I have always wanted it to."

This latest incarnation was a quintet completed by bassist Jimmy Leverton and trap-rattler Eric Dillon, but how did it come about?

Kim's brother/manager, Harry, approached the Glaswegian Anderson who, with Jimmy and Eric amongst others billed as Hemlock, acted as a support act for one of Savoy Brown's recent cross-state crusades on the other side of the Atlantic. Anderson's pedigree already included playing on such as Dave Cousins' "Two Weeks Last Summer" (A&M, 1972), and being a long-time kingpin of Keef Hartley's entourage, as well as issuing a solo album on Deram, "Bright City" (U.K.: SDL 3, 10th September 1971; U.S.: DES 18062, April 1972), while Hemlock had been similarly-blessed by the Decca U.K./London Records U.S.A. offshoot when their eponymous LP effort was unveiled in Britain only as SML 1102 on 12th October 1973.

Harry Simmonds took over the reigns for their business affairs also but, as Miller was wont to point out, the seven-piece Hemlock, while being an excellent band technically, somehow lacked excitement. Since the three compatriots wished to stay together and hopefully progress, Simmonds’ proposal of Savoy Brown incumbency was soon accepted.

Dillon and Leverton had been in harness as a rhythm section for a long time, the former beginning his drumming obsession at 13 and being expelled from school for pursuing stick work at the expense of all else. At 15 he was signed by Gerry Dorsey - later to find superstardom as Engelbert Humperdinck - as skin-beater in the singer's regular backing crew, and from there he and Leverton liaised after becoming members of ex-Jimi Hendrix four-stringer Noel Redding's project, Fat Mattress, which took them to see Uncle Sam. As Mattress failed to emulate the Hendrix Experience's acclaim, so both quit to spend two years in session work prior to throwing in their lot with Anderson.

Leverton's pedigree was not dissimilar to Dillon's, both having served an apprenticeship in the seething hotbed of talent that was the German bierkellers of the 1960's; performing with Redding in The Loving Kind and clinching a spell in Engelbert's band, so that when Noel requested he join Fat Mattress Jimmy recommended Eric too. Keeping it in the family, eh?

Anyway, by this means, having restored Savoy Brown to a four-piece, it seemed a great idea to go the whole hog and get Stan Webb in on the act, since Chicken Shack were also in a state of turbulence and indecision. Webb, who was always somehow bigger than the group he fronted, but which he declined to headline his name over during their lengthy existence, liked the idea of pooling resources with his 'rival' Simmonds when courted, and thus Savoy Brown Mk. Heaven-Knows-What bounced into view.

Still signed to Decca/London, they wasted no time in getting the contents of their proposed long-player down on tape, the prolific Anderson penning most of the numbers to be promoted along with one from Stan, a brace from Kim and a tilt at Elias McDaniel - alias Bo Diddley's - "You Don't Love Me."

Cut in London at Island Records' Basing Street establishment, the whole shebang was christened, aptly, "Boogie Brothers", and rush-released in America as London XPS 638, thereby removing them from the subsidiary Parrot imprint which had played host to Savoy wares to date. A single was pulled in "Everybody Loves A Drinking Man" - coupled with "Ride On Babe" from "Jack The Toad" - as 45-206, which failed to breach the best-sellers, but on April 20th 1974 "Boogie Brothers" entered the chart to initiate an 8-week stay whose high point would be No. 101. An accompanying tour there was greeted with the usual euphoric reception as Webb later recalled in print: 'Yeh, it went well - we took Madison Square Garden in New York by storm…'

In the United Kingdom Decca responded by scheduling their identical "Boogie Brothers" for May 24th unveiling as SKL 5186, thereby relegating the combo once again to the label's standard full-price series from the luxury TXS line which they'd latterly occupied. Missing this time also was the attendant expansive gatefold sleeve.

Decca declined to pull a seven-inch extract from the parent, but were exasperated that even with this powerful personnel a notation on the published hot sales register eluded the Brown's yet again. Sadly, future company policy would ensure this could never be bettered, for "Boogie" was to be the last of their 'official' albums ever accorded U.K. issue by 'The Supreme Record Company'; from that point onwards they became a truly American - and elsewhere - phenomenon.

Perhaps a little surprisingly, bearing in mind that Simmonds, Webb and Anderson were all forthright figures, this Savoy Brown remained together for almost a year before fragmenting. In 1975 Stan and Miller went off to form Broken Glass with keyboarder Tony Ashton; Jimmy ensconced himself on Henry McCullough's album for George Harrison's Dark Horse set-up, "Mind Your Own Business", and Eric found himself playing with Dog Soldier - where Miller Anderson and Keef Hartley would at one time or another also put in an appearance. And Kim?

In '75, Mr. Simmonds re-united with ex-Savoyians Paul Raymond (Keyboards, Guitar, Vocals) and drummer/percussionist Dave Bidwell, bringing in also Andy Rae (Bass, Vocals) and, following Bidwell's tragic drug-related demise, Tommy Farnell as replacement, and headed back on down the road towards an LP billed as "Wire Fire". That wheel was turning once more...