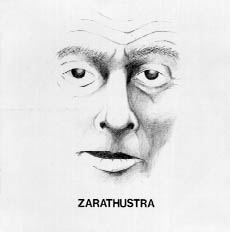 Here's another legendary band, which was rambling around the Hamburg clubs more than twenty years ago! Formed way back in 1969, Zarathustra chose a great name, associated with both. Nietzsche and Strauss. They were: Ernst Herzner (lead vocals), Wolfgang Reimer (guitar, vocals, percussion), Michael Just (bass, vocals), Klaus Werner (organ) and Wolfgang Behrmann (drums, percussion). Throughout 1969, two of the members also were part-time members of the beat group Why Five, contributing to an obscure beat-age sampler Ausgerecitnet Bananen (Elite Special XZ LP 5105). Hardly distinguished from other raucous heavy progressive bands of the time, Zarathustra were still able to get a recording contract with Metronome in 1971. It seems that this label was quite open-minded when it came to signing new bands, but on the other hand always failed to promote their artists in a proper manner: I Drive (UK), Grail (UK), Prof Wolfff, Second Life, Made In Germany, Hallelujah (UK), Os Mundi and Franz de Byl.

Zarathustra were put into the Windrose Studios, Hamburg, in November 1971 with an unknown production team of Till Landsmann (producer) and Friedrich Bischoff (engineer). The resulting album was a tour-de-force of energetic heavy progressive rock, a kind of Teutonic Uriah Heep ("Gypsy" was one of their live favourites) with some added Jon Lord-like organ licks. Six great tracks with "Nightmare" as the melodic highlight. The music was not ‘progressive’ in the sense of expanded instrumentation and arrangements, rather it was a straight power-rock album the way it used to be. Zarathustra broke up in Spring 1972.