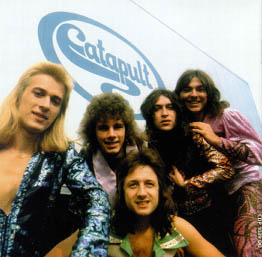 This is the story of Catapult, or in other words what the consequences of a well-spent holiday can be. Early in the Summer of 1973 Geertjan Hessing, Erwin van Prehn, Aart Mol and Cees Bergman decided to form a band. They were all veterans of the Leiden music scene, having previously worked together in several groups without achieving any noteworthy success. That year the quartet took a holiday in the Spanish seaside resort Lloret de Mar. During their stay there, concrete plans were drawn up, and from then on they started taking their work seriously. The guys dutifully promised each other that "no matter what happens, we'll stay together." Various holiday girlfriends, having heard of their wild plans gave them many words of encouragement, such as "I hope you're gonna hit the big time."

Once they were back at home they threw themselves into their work immediately, quitting jobs and dropping out of school to concentrate wholeheartedly on music. Assisted by their manager Aad van Delft, the band chose the first of September 1973 as the official starting date. Later that month the band was strengthened by the addition of keyboard player Michael Eschauzier. Barry Hay, the singer of Golden Earring, conjured up a catchy band name: Catapult. The band logo was designed by the artist and genius Wim T. Schippers.

On the twenty-third of November the band played their first gig supporting Golden Earring in the Maassluis Sport Hall. In the month following their live debut, they recorded their first single, "Hit The Big Time" under the guidance of ex-Earring drummer Jaap Eggermont. As the title suggests, the song was about their stay in Spain. It is a raunchy, catchy, and primarily energetic song that was to place the band slap bang in the middle of the glitter rage. Using a combination of extravagant attire, outrageous haircuts, and flashy rock'n'roll, Catapult quickly became the Dutch answer to British glam giants like The Sweet, Mud, and Slade.

In April 1974 Elmer Veerhoff was to replace the departed Michael Eschauzier, and the definitive line-up was born. In 1974, 1975, and 1976 the band was to score several hits: "Let Your Hair Hang Down", "Teeny-Bopper Band", "Seven Eleven", and "The Stealer". These works showed that Catapult, as opposed to many of their contemporaries, were no "dime a dozen" band. The songs are put together intelligently, the arrangements are adventurous, and the musicianship leaves nothing to be desired. The high, recognizable vocals of Cees Bergman were also an extra attraction. These were all qualities that were optimally exploited by producer Jaap Eggermont. Catapult was also one of the first pop groups for whom synthesizers became a definitive part of their sound. During these first years the band was also known as a live sensation. To the absolute horror of some club owners, Catapult were also a band who weren't afraid to sporadically flirt with hard rock during their live performances. This was a secret passion that was to bear fruit in B-sides and album tracks like "Springtime Ballyhoo" and "Run For My Wife". When their only official album was released in 1974, the band was at the peak of their success. The singles were selling well and the band was performing weekly at packed venues. Their success was not only limited to The Netherlands, as their singles were also released in Austria, Switzerland, Germany, France and England where they received good air-play. The band also established itself in Belgium, where they regularly performed live. The Dutch music press, however, turned its nose up at everything that bore the slightest resemblance to glam rock, consequently from 1976 onwards the genre's popularity was to take a nosedive. Although the band was able to thrive on live shows for a short period of time, hit singles were to elude them. The suitably entitled single "Here We Go" was the last one to even get a glimpse of the charts. The band became a victim of a dying trend, and were to give their farewell gig in the "Feest Paleis" in Beervelde, Belgium on the 23rd of December 1979.

The promise "no matter what happens, we'll stay together" was not to be forgotten. The quintet started a recording studio and production company under the name of "Cat Music", which remains active in a variety of ways to this day. The artists have clothed themselves in a new wave jacket (The Monotones), rode a surfboard (The Surfers), rapped and scratched (Master Genius), and recorded a hard rock album (Picture). To boot, they have recorded some hilarious parodies and carnival songs. The guys seem to have an uncanny feeling for "what's hot and what's not", making their every project a success. They were already writing songs for Dutch singers during the Seventies, and in the years to follow they became even more productive in this field. The way in which the quintet work on their many different projects reveals an astonishing diversity. Even though they worked behind the scenes, the former members of Catapult continued to leave their mark on the Dutch pop music scene during the eighties and nineties. No matter how varied the projects are, the combination of skill and an ear for a good composition ensure that the productions are always up to scratch.

This compilation helps us to understand where Aart Mol, Cees Bergman, Erwin van Prehn, Geertjan Hessing and Elmer Veerhoff learnt their art form. Catapult was one of the most exciting Dutch acts of the Seventies, proof of which can be heard on "The Single Collection".