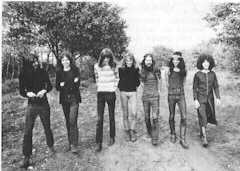 Capital Canal City Incorporated, also known as CCC Inc., was founded in 1965. The full name of the band, unabbreviated, was never used. Paul Kroese, Bert Timmerman and Cor van Sliedrecht, all students of the Rietveld Academy of Arts, started the group together with Joost Belinfante, son of the rector magnificus of the Capital City University. Sometime later, Huib Schreurs joined them, followed a short while later by Ernst Jansz, a friend of Cor's. In the beginning, the band played typical American-style folk music, covers of songs of Leadbelly and Woody Guthrie. CCC Inc. often gigged at "De Waag" of Coby Schrijer. She put the group in touch with Lennaert Nijgh (later to write many songs for Boudewijn de Groot), who became their first manager. The first radio show with Wim Noordhoek took place soon thereafter. Band members Van Sliedrecht and Frank Hoogkamer decided to quit the band. Appie Rammers joined up as the replacement on bass. At this time, Nijgh secured contract deals featuring some really confusing amounts, such as HFL 333.33. Thus, the band's collaboration with Nijgh Fades slowly ended, and his successor was Frank van der Meyden.

In late 1969, the group decided to live together, and for that purpose Belinfante bought a farm in the Peel (Dutch regent in N. Brabant). In June 1970, the debut album, "To Our Grandchildren" was recorded. Wim Noordhoek was chosen to produce the LP. CCC Inc. celebrated their peak at the same time with the upcoming 'Provadya' movement.

They were less satisfied with the follow-up, "Watching The Evening Sun", released in 1971. Their third album, "Castle In Spain" was recorded in England with producer Sandy Robertson, and released on Polydor. The group finally split up in 1974.

Schreurs subsequently found a regular spot for himself at Paradiso (a rock concert venue in Amsterdam), Rammers formed another group, Link; Beusekom joined Electric Tear; Jan Kloos switched to biological studies, Belinfante and Jansz started up their own Slumberlandband and became very successful in the early 1980s with Doe Maar.