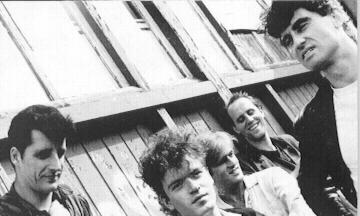 This popular Dutch-language rock group, was born out of the ashes of "Stampei", which was founded in 1974, it numbered 8 members, and originally functioned as a backing group for a gay cabaret group from the USA, "Hot Peaches". At this stage, they were mainly a show band. Stampei made only one single, "Blij Dat Het Morgen Maandag Is" (Glad Its Monday Tomorrow), and split in 1981. Ex-members Bert Stelder (vocals, guitar), Arzbach and brothers Van der Lubbe formed De Dijk together with drummer Daniel Derks; the group was named after the Amsterdam Zeedijk (the geographical location of the band members' living quarters). Derks left soon, but De Dijk became one of the most well-known groups in Holland in the eighties. The music they played was mainly solid, straight-ahead American style rock, mixed with rhythm & blues and soul.

For their self-titled 1982 debut album, with Christian Muiser having stepped in as the drummer, songwriter Huub van der Lubbe came up with straight-through-the-heart Dutch songs. The lyrics mainly told stories about women and the big city life. The single, "Bloedend Hart" (Bleeding Heart), which preceded the release of "De Dijk" is a classic, but surprisingly did not reach higher than the "tip-parade", although popularity-wise, in those days Dutch music was at its peak. Stelder and Muiser were then replaced by Kops and Broek and the follow-up album, "Nooit Meer Tarzan" was released. The group continued to release albums regularly, with each new release getting better reviews than its predecessor. But it wasn't until 1987 that De Dijk got their first charting hit single, "Mag Het Licht Uit" (Put The Lights Out) from their very strong fourth album, "Wakker In Een Vreemde Wereld". Members of De Dijk at this point were no longer limited to their work within the band; Kops debuted as a movie soundtrack composer, Hans van der Lubbe tried his hand at writing musicals, Broek played drums for a while in a rockabilly group "Jump, Dickie Jump", and also produced albums by other artists, as well as De Dijk's own. Huub van der Lubbe starred in several Dutch movies such as: "De Aanslag" and "Brandende Liefde". Together with Kops, he worked on the opera called Faustus.

1989 was the breakthrough year for the band. "Niemand In De Stad" and its singles, "Nergens Goed Voor" (Good For Nothing) and "Ik Kan Het Niet Alleen" (I Can't Do It Alone) became major hits. "De Dijk Live" contained all of the band's greatest hits to date and served as a solid testament to their recent live activities. The live version of "Bloedend Hart" became a huge hit in Spring of 1990. That Summer, De Dijk participated in the New Music Seminar in New York. The next album, "Nooit Genoeg" sounded better and more soulful than any of its predecessors! The hit singles and the sold-out tour left no doubts as to the band's great popularity at home. With the help of the "Hot Haarlemmerdijk Horns", the pattern continued on "Zeven Levens". As their angry reaction to the news of the Neo-Nazi violence in Germany, De Dijk recorded a joint single together with the Scene in June 1993, "De Wereld Is Van Iedereen" (Everybody Owns The World). In 1994, the group received a platinum record for "De Dijk Live" and a video was also released with the two gigs recorded at the Paradiso in Amsterdam. De Dijk also received De Gouden Harp (The Golden Harp), a important Dutch music award. The following album, "De Blauwe Schuit", stylistically was somewhat reminiscent of its predecessors, "Niemand In De Stad", "Nooit Genoeg" and "Zeven Levens", and was named after a group of musicians from the Medieval times. The ballad, "Als Ze Er Niet Is" (When She's Not There) became a huge hit, and the following tour - a huge success…