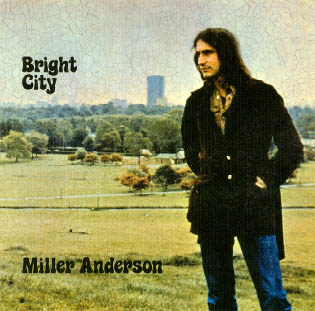 Armed with a powerful, soulful voice and a commanding guitar style, Miller Anderson was much in demand during the heyday of his career, The Scots born singer, guitarist and songwriter first came to fame with the Keef Hartley Band, which established him as a well-respected frontman. He joined the band in 1968 and stayed with Hartley for some three years, during which time they toured hard, became a top festival and club attraction and made some excellent albums.

Keef, a hard-hitting drummer from Lancashire, (ex-Artwoods and John Mayall), had put

together a jazz rock band -that compared favourably with America's Blood, Sweat & Tears. He found an ally in Miller Anderson, who not only sang lead and played guitar for his band, but contributed the majority of the material. Their first album together was the well-received 'Half Breed', (1968), followed by 'The Battle Of NW6' (1969) and 'The Time Is Near' (1970), all on the Deram label. One of their best LPs was 'Overdog' released in 1971, on which Miller contributed seven of the songs, including the title track and powerful numbers like 'You Can Choose', and 'Plain Talkin', which showcased Anderson's driving guitar solos. Keef Hartley went on to form a much bigger outfit with brass players and they recorded the 'Little Big Band' album at London's Marquee Club in 1971. However it seems that Miller and Keef didn't always get on too well, and Anderson left the band soon afterwards. It was a good opportunity to record his own solo album and the result was 'Bright City', now heard for the first time on CD.

Miller wrote all the material for his project which was first released on Deram in 1971. The songs, including 'Alice Mercy (To Whom It May Concern)', 'The Age Of Progress', 'Nothing In This World', and 'Bright City', remind us what a fine singer has been missing from mainstream rock these past few years. Among those helping him out were Neil Hubbard (guitar), the late Gary Thain (bass), who later joined Uriah Heep, Mick Weaver, (sometimes known as Wynder K. Frogg), and Peter Dines, on keyboards. Session man Lynn Dobson from the Manfred Mann band played -flute, while Eric Dillon was on drums. Producer Neil Slaven sat in on percussion.

Dines and Weaver all played on Keef Hartley's albums, so Miller was using mostly familiar faces to present his own music to the world. But getting a "name" in the music biz is harder than it looks, and back in the early Seventies at least, Keef Hartley still had the pulling power that Miller Anderson lacked on his own.

For a while Miller had his own band called Hemlock with James Leverton (bass) and Eric Dillon (drums). It was a struggle to establish themselves and they joined forces with Kim Simmonds and Stan Webb (ex-Chicken Shack), to form a new version of the Savoy Brown blues band which went on a brief tour of America in the Spring of 1974. However the band which had been bashing round the circuit for years with different personnel, finally fell apart in confusion. In 1974 Miller rejoined his old mate Keef Hartley. They formed a new Dog Soldier and released one album of the same name for United Artists. It proved a failure and the normally cheerful 'Lancashire Hustler', Keef

Hartley announced his intention of quitting his role as a band leader. The music scene was changing and brass oriented jazz-rock was under attack from Glam Rock. Anderson decided that if he couldn't beat ‘em, he'd join 'em, and in 1976 he teamed up with Marc Bolan in what proved to be the last version of T.Rex. He worked alongside Dino Dines (keyboards), Herbie Flowers (bass), and Tony Newman (drums). T.Rex hit the road with punk group The Damned on the Dandy In The Underworld Tour in 1977. Miller's presence on guitar gave Marc more freedom on stage and Bolan was very proud of this highly professional outfit which he called 'the best rock'n'roll band in the world".

Sadly Marc Bolan was killed in a car accident on September 16, 1977 and the band broke up. Miller Anderson carried on working, but never achieved the fame and fortune of his contemporaries. However he earned the respect of a great many fellow musicians. Today he continues to write and perform and in late 1994 he reminds us of a rewarding aspect of the thriving Seventies music scene that now seems like a bygone age.