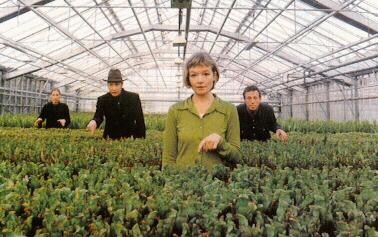 The Nits are a successful pop group from Amsterdam, which deserves a very special and unique place in Nederpop. They were formed in early 1974 by Rietveld student Hofstede and bass player Alex Roelofs. Hofstede had already been playing with guitarist Michiel Peters, who, in turn, recruited Kloet. Their initial influences varied from country-rock (Dillard & Clark) to Merseybeat (The Searchers), surfacing in original short melodic pop songs with the emphasis on the vocal parts. The first 2 years the group's time was filled with endless demo recording sessions. Their debut stage appearance took place in 1977 alongside several other groups at the Paradiso. Upon the release of their first single, ‘Yes Or No’, the band made an appearance at "TopPop", a then-famous TV pop programme. This song introduced the band as a group of young dogs. In the Summer of that same year, The Nits' first eponymous album was recorded at the British Rockfield Studios, mostly containing bright three-minute pop songs. Due to bad distribution and promotion, this record sank without a trace. After signing a contract with CBS, the band slowly developed a more modern and 'intellectual' sound, this influenced by bands such as XTC, Kraftwerk, and also some local Amsterdam groups, such as The Tapes. The group's second album, "Tent", was produced by former Supersister, Sweet d'Buster, Transister and Golden Earring keyboardist Robert Jan Stips, and contained the hit single, "Tutti Ragazzi". The lyrics are at times funny, and mostly talk about distant observations, filled with symbolism: bungalows, tents, caravans, trains and boats... "Newflat", the band's third album, showcased The Nits as a modern, futuristic, 'hi-tech' band, but, surprisingly, this style was a success outside Holland at the time, so the band embarked on a tour of Germany, Switzerland, France and Scandinavia. Roelofs departed from the band, following the release of their next album, "Work". Shortly before the second German tour, he was replaced by Stips, who easily fit in, due to his prior production work for the band. With Stips' arrival, the detached and calculated style of the band changed on their next release, "Omsk", for the warmer, more emotional one, involving a lot of acoustic rhythm instruments. The single, "Nescio", made the national Top 10, and, thus, The Nits finally achieved their ultimate breakthrough in Holland, which resulted in the band receiving the Edison Award.

The following mini-album "Kilo" and the hit single it contained, "Sketches Of Spain", further developed upon the newly-invented musical style of the group. In an attempt to achieve a more solid and formidable international acclaim, the next album, "Adieu, Sweet Bahnhof", was recorded with the help of Stars On 45 producer Jaap Eggermont, who tried to change The Nits' sound by infusing different styles from other popular acts of the day. Such an imposition resulted in the departure of Peters, who was never replaced. Instead, the band recorded another album, "Henk" - with the help of various guest musicians, among which were bassist Joke Geraets and background vocalist Petra Lugtenburg (Cloud Nine, later in Siobhan). This collaboration with two female musicians resulted in a further joint venture, "La Grande Parade": 39 Dutch musicians created together a composition inspired by a painting. This, in turn, led to a various artists compilation album, recorded in the rehearsal room of The Nits, and released by the Werf label, "La Grande Parade". In the meantime, ever since the release of "Henk", The Nits had been demonstrating with increasing clarity their own musical style and identity. "Henk" contained songs featuring an introvert character centrestage; melancholic folksiness is the main characteristic this album is underlined with. The following release, "In The Dutch Mountains", on which Geraets was featured as a permanent member, was, for the most part, recorded live and contained the title track, which was to become the band's biggest hit yet! It reached the Top 10 in many European countries. The album brought the band their second Edison. At the end of 1988, another mini-album was released, entitled, "Hat"- a more melancholic album. Just a few months later, in early 1989, Michiel Peters released his first solo album, "Infant King", a mainly acoustic record, done with the help of keyboard player Dennis Duchhart (Mathilde Santing), pedal-steel guitarist Jaap van Beusekom (CCC Inc.) and the four Nits members. The Nits themselves completed a successful tour of Germany, Switzerland, France and Scandinavia. Another dream-come-true for the band was their Spring 1989 tourne of Russia - they played three nights in a row at the 'Rossiya' Theatre in Moscow. Upon their return to Holland, the band received yet another Edison, and also won the ‘BV Popprice’.

They didn't have too much time to rest at all during this period... Throughout the Summer of 1989, the Nits were touring almost non-stop outside their homeland, including in Canada and the US. At the end of that same year, the band released a new album, "Urk", a live set (3LP/2CD), off which "Adieu Sweet Bahnhof" and "Home Before Dark" were released as singles. "Urk" was also released as a box, as a limited edition, containing a book by Pieter Cramer about the history of the band. Simultaneously a video was also released, featuring a recent gig at the Amsterdam Stadsschouwburg. "Urk" turned out to be the most successful Nits album up to date, achieving platinum status, selling in excess of 100,000 copies. Moreover, The Nits received the Golden Harp Award from the foundation Conamus. Spring 1990 was spent modernising the Werf studio, where the band set out to work on their next album, "Giant Normal Dwarf". On the latter, the band attempted to infuse more excitement into their music, but the result, sadly, turned out to be below the usual standard for The Nits commercially, as well as artistically. The band embarked on a tour of Holland, Austria, Hungary, Switzerland, Denmark, France, Belgium, Canada and the US, promoting this release, but the touring band this time did not feature Geraets, who had fallen ill. The Nits also opened the "New Music Seminar" in New York. In the Autumn 1991, the band worked in the Werf studio on their next release, "Ting", a melancholic return, a typically moody Autumn record, which was really a throwback to the melancholic sound of "Hat". The music revolved around two piano parts and a classical percussion section, "Chamber pop music" would be the best description. The new single, "Soap Bubble Box", inspired by their stay in New York, brought Nits (who had, by then, dropped the "the" in their name) back into the hit-parade. During the recording of "Ting" their collaboration with Martin Bakker (bass) and Peter Meuris (percussion, violin) proved to be a successful one, so, subsequently, these two were invited to join the band for the Ting tour as guest musicians. Most of the gigs got completely sold out as usual. At the same time, Stips was working on a symphonic piece, aided by Kloet and Hofstede, this premiered live in June 1992 in Amsterdam by Radio Symphonic Orchestra, directed by Jan Stulen. The footage of the event was broadcast on TV; the concert was also released on CD, as "Hjuvi, A Rhapsody In Time". Different movements of this concerto were tinged with influences of Stips' musical role models: Bach, Gershwin, Strawinsky, Satie, Bernstein, Philip Glass, the Beatles and the Beach Boys. Nits also wrote music for BBC TV productions, such as Rough Guide and Bedlam Brittanica.

Their next album, "Da Da Da", was a lightweight pop record, even considering the melancholic aspects, which are always present in the band's sound. Together with Freek de Jonge, Nits did a number of theatre shows as Frits. The following CD (and the accompanying video) release, documenting one such performance under this moniker, entitled, "Dankzij De Dijken", was the resulting output. The title track was a Dutch language adaptation of ‘The Dutch Mountains’. Besides a few Frits originals, the material contained works of an ancient cabaret group ‘Neerlands Hoop’ which Freek was the leader of.

In August 1995, a new single, "Broken Wing", was released (with three Beatles covers as bonuses), followed by a retrospective compilation CD, "Nest", and the video, "Vest", which contained self-produced clips of the band. "Quest" was yet another compilation release which came out later that same year, featuring B-sides and studio outtakes. "Nest", "Quest" and the "Vest" video formed together the contents of the box set released in the same year, "Nits Met Radio Symphony Orchestra". During the promotional tour, when Nits played all their biggest hits live for the last time, Robert-Jan Stips announced his departure from the band. On 24th August 1996, the tour wound up with an impressive grand finale - a huge show during the Amsterdam "Uitmarkt". It was broadcast live on television. One month later, Robert-Jan was already back on stage with his new band Stips, playing old Supersister songs. This was a short-lived affair, following which he joined Freek de Jonge on his "Gemeen Goed" tour.

Hofstede and Kloet took a one year sabbatical, but remained active in the Werf studio in the Summer of 1997. They recorded a new album there, and a new tour has been scheduled for the Spring of 1998. "Alankomaat", the band's latest album, has been released in March 1998. Eight new songs on it are typical Nits numbers, even with Stips no longer present in the lineup. The music is "low-fi" and, according to some fans' descriptions, a bit boring. The title of the album is a Finnish word for Lowlands.

Keyboard player Stips from The Hague played in Supersister and after that spent some time in Golden Earring and Sweet d'Buster.  Upon departing from Sweet d'Buster, he formed his own group Transister in 1979, featuring Henk Wijtman (dr),
Dick Schulte (b, to Meteors) and Huberta de Graaf (v, vi, ex-Special Thanks, to Tapes).

Transister disbanded after just one LP in 1980.  At this point, Robert-Jan resumed his solo career and resurfaced in 1982 in the Amsterdam Nits.