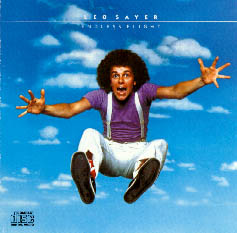 Born 21 May 1948, Shoreham-on-Sea, England. Sayer fronted the Terraplane Blues Band while as a Sussex art student before moving to London, where he supplemented his wages as an

illustrator by street husking and via floor spots in folk clubs. In 1971, he formed Patches with drummer Dave Courtney to whose melodies he provided lyrics. Speculating in artist management, Courtney's former employer, Adam Faith found the group ultimately unimpressive and chose only to promote its animated X-factor - Sayer. During initial sessions at Roger Daltrey's studio, the Who's vocalist was sufficiently impressed by the raw material to record some

Courtney-Sayer numbers himself. These included 'Giving It All Away', Daltrey's biggest solo hit. After a miss with 'Why Is Everybody Going Home', Sayer reached the UK number 1 spot with 1973's exuberant 'The Show Must Go On' but immediate US success was thwarted by a chart-topping cover by Three Dog Night. Seeing him mime the song in a clown costume and pan-caked face on BBC television's Top Of The Pops, some dismissed Sayer as a one-shot novelty, but he had the last laugh on such detractors when his popularity continued into the next decade. After 'One Man Band' and 'Long Tall Glasses' - the US Hot 100 breakthrough - came the severing of Sayer's partnership with Courtney in 1975 during the making of Another Year. With a new co-writer in Frank

Furrell (ex-Supertramp) from his backing group, Sayer rallied with the clever 'Moonlighting'. Though the year ended on a sour note with an ill-advised version of the Beatles' 'Let It Be', 1976 brought a US million-seller in 'You Make Me Feel Like Dancing’ just as disco sashayed near its Saturday Night Fever apogee.

From 1977's Endless Flight (produced by fashionable Richard Perry), the non-original ballad, 'When I Need You', marked Sayer's commercial peak at home - where the BBC engaged him for two television series. However, with the title track of Thunder In My Heart halting just outside the UK Top 20, hits suddenly became harder to come by with 1978's

'I Can't Stop Lovin' You' and telling revivals of Buddy Holly's 'Raining In My Heart' and Bobby Vee's 'More Than I Can Say' the only unequivocal smashes as his 1983 chart swan-song (with 'Till You Come Back To Me') loomed nearer. Nevertheless, even 1979's fallow period for singles was mitigated by huge returns for a compilation. By the late 80s Sayer was bereft of a recording contract, having severed his long-standing relationship with Chrysalis Records and was reduced to self-financing his UK tours. A legal wrangle with his former manager, Adam Faith, resulted in Sayer reportedly receiving BP650,000 in lost royalties. His recording career recommenced in 1990 after signing to

EMI and was reunited with producer Alan Tarney. Indications of a revival in his chart fortunes remain to be seen; however, this artist has been written off twice before, in 1973 and 1979, and critics should not be so quick to do so again.