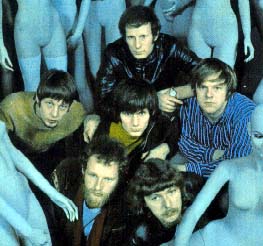 This Amsterdam pop group was already popular on the local scene for years before they got nationally famous with the hit "Hair" from the musical of the same title.

The band was formed in 1965 by Siebe van der Zee (v, s, fl, b); various other members came and went: Caro Kalkman (v), Dirk van der Ploeg (v, g, later solo), Valentijn Geverts (dr, o, p, in 1968 replaced by Wim Taarling, ex-Trix & Paramounts), Bart Bos (b) and Duco de Rijk (v, g, member from 1967 'til 1970, ex-Graaf X & Klimax, in 1970 to Gallery). In 1968, John Brands (ex-Elements, to Playboys and solo) joined as a singer. Supported by Radio Veronica, the band slowly garnered national recognition.  In fact, they ended up topping the 1968 Hitweek hit parade chart!  After the split of the Rodijs from Groningen in 1969, the latter group merged together with Zen, resulting in the following line-up: Siebe, Bart, Wim, Ben Groen (g, ex-Rodijs) and Harry Rijnbergen (v, g, ex-Rodijs, to Harley Jay), and 2 singles.

Jack Smulders and singer John Brands were the leaders of the quartet the Elements from Amersfoort; they always had a giant blowup-animal as a mascot with them on stage. After the split of the group in 1968, John went to Zen.