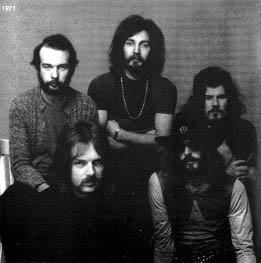 The Maskers was a hard rock group. In the wake of their split in 1970, Jan de Hont (guitar, vocals) Ador Otting (vocals, keyboards) were replaced in 1971 by Hessel de Vries (ex-Angelflight Railways)! Ador later played in Pandemonium. Frans Smit (drums, ex-Maskers), went on to join Brainbox, and was replaced in 1970 by Dennis Whitebread, ex-Ekseption); Wim de Vries (vocals, bass, ex-Sharks & Me) also joined. Later on, yet another guitarist Adri de Hond joined te band. In 1972, the band changed their name to Cargo.

This line-up recorded a single for Imperial, "Little Sister"/"Walk On By". It became a minor hit in the Netherlands but left no permanent impression.

Frans Smit left the band to join Brainbox; at the end of 1970, he was replaced by Jerry Göbbel.

In 1972, September changed their name to Cargo. The change in name indicated also a change in musical direction for the band. They transitioned from a singles band to a "serious" rock band, focusing now on long, mostly instrumental passages. The alternating lead guitars of Jan and Adri became reminiscent of Wishbone Ash. Also the very crafty and elaborate drumming of Dennis Whitbread drew plenty of attention.

Under this monicker, they made one (eponymous) album containing only four very long tracks. It was received favorably by the Dutch press but sales-wise unfortunately didn't amount to much. This lack of recognition is presumably the main reason why the band broke up by the end of 1972.