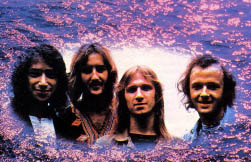 Of all the groups in the 1970s that combined elements of rock and classical music, Focus is, without a doubt, the most notable Dutch group widely known outside the Netherlands.

Thijs van Leer founded Focus, following his conservatory studies, alongside bassist Martin Dresden and drummer Hans Cleuver. This initial line up received most of its work on the cabaret circuit, and in 1969 - also as the backing group for the Dutch cast of "Hair".

In 1970, the unique and talented guitarist, one Jan Akkerman (ex-Brainbox, Hans Dulfer), joined the group, and their first album release, "In and Out of Focus" followed one year later. At this early stage, the musical style of Focus had not yet completely crystallised, which is evidenced by this album. With the exception of "Anonymous" and "House of the King" (the latter released as a single), the album did not amount to much, compared to its followers.

Later that same year, Havermans left to pursue a career as a solo artist. He was replaced by Bert Ruiter (ex-Angelflight Railways). This line up proceeded to record "Focus 3", almost live, in the studio - a worthy followup to "Moving Waves", and almost as successful. The single, "Sylvia" was culled from this album.

Now Focus were on top, and in high demand in their home land, and abroad, as a hot live act. The albums and singles had generated huge popularity both in England and in the U.S. It was at their peak that "Focus Live At The Rainbow" was recorded in London, a living testament to the lasting power of the group’s live sound from the period, as well as Akkerman’s phenomenal fretboard virtuosity, released May 5th, 1973.

In 1973, Van der Linden left to join Rick van der Linden (ex-Ekseption) in the creation of Trace, and was replaced by ex-Stone the Crows drummer Collin Allen (also previously with Zoot Money and John Mayall). This lineup recorded a somewhat less successful and weaker "Hamburger Concerto".

1975 was a hectic year for Focus. There was trouble looming ahead... First, Collin departed, and persistent rumours suggested that Akkerman was to follow his suit himself very soon. Thus, "Mother Focus" was recorded, in this state of turmoil, with the American drummer David Kemper, stepping in. However, Allen still played on one track. This album also indicated the change of the group’s style towards a more funky end of the spectrum, and Akkerman, who had been rowing with Van Leer for quite some time about musical direction, openly distanced himself from the end-product. According to Akkerman it was "…typical American music, has nothing to do with Focus."

Early 1976 finally saw the two egos clash heavily, which resulted in Akkerman’s departure from the band. He was replaced by the Belgian jazz-rock guitarist Philip Catherine. From that moment on, Focus no longer had any impact on the scene, and subsequently lost all the gumption and the success, especially compared to the classic, Akkerman lineup.

Come 1977, Eef Albers and P.J. Proby joined the group, to record its weakest and the most confused offering to date, "Focus Con Proby", which contained old recordings, not used over a period of the previous few years, now remixed by English producer Mike Vernon, with Proby’s vocals added.  Steve Smith (ex-Jean-Luc Ponty's Pegasus) was featured on drums, and Jons Pistoor (ex-Maggie McNeal) on keyboards.

In 1978, the group finally split up, without making too much noise - the media didn’t even notice.

Discography by: Adri Verhoef (a3@a3.xs4all.nl-removespam)
Article translated by: Louis Rentrop (uriahboz@zeelandnet.nl)
Back to Alex's Home Page
Back to the Nederpop index