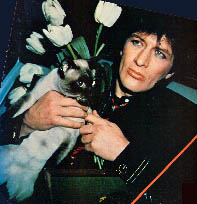 Herman Brood was born in Zwolle on November 5, 1946. In the early years, his influences included Fats Domino and Little Richard. He always liked to paint and play piano. Upon turning 17, he entered an art school. In 1964, Brood started his music career, The Moans becoming his first group (later to become Long Tall Ernie And The Shakers). But his stint with the group didn’t prove to be long-lived, as Harry Muskee asked him to join his group Cuby And The Blizzards shortly thereafter.

After a short lull, which lasted just a few years, Brood bounced back on the scene in 1974. His next group was Stud, but its span was also very short, and in 1975 he launched his own Flash & Dance Band; one LP, Showbiz Blues (Universe - 1975) got recorded and released as a result. He subsequently teamed up with Herman van Boeyen in the creation of Vitesse. Their first LP, Vitesse (Reprise - 1976) was released shortly after this new partnership was forged.

In July 1979, the Wild Romance left for the USA.  Slowly but surely, Brood was establishing himself as a worldwide rock sensation, as his singles kept steadily creeping up the Top 100 charts.  However, too much publicity can sometimes kill an artist; due to the media overkill, Brood career unexpectedly took a plunge, and the fortunes reversed, in the typical Brood fashion, once again, overnight... One of Brood’s best albums to date, the U.S.-recorded Go Nutz (Ariola -1980) was torn apart by vicious reviews in the music press, although Wait A Minute (Ariola - 1980), Modern Times Revive (Ariola - 1981) and Frisz & Sympatisz (Ariola - 1982) did much better, critical acclaim and sales-wise.

His next move was to team up once again with Lademacher, whose own band The Innersleeve Flops was off to a good start at that time.  David Hollestelle became the new guitarist in Brood’s band. With The Brood (Sky - 1984) and Buhnensucht Live (Sky - 1985), he was once again on his way to success. Herman is often in the public eye, and the media loves to put him right in the spotlight, as the Netherlands’ own "Rock’n’Roll Junkie".  (What with hit songs such as "Rock’n’Roll Junkie", "Dope Sucks", et. al., not to mention his notorious reputation as a heavy druggie - hardly surprising).  In 1986, he made his debute as a theatrical actor in the play called Kamikaze.  1988 proved to be another one of the most successful years in Brood’s career, featuring his appearance at the famous Pinkpop Festival, and the release of the very well-received Yada Yada (CBS - 1988), along with another hit single, Sleeping Bird. Brood marked his 25th anniversary as a rock artist, by continuing to record new albums, Hooks (CBS - 1989) and Freeze (CBS - 1990), on which he was backed by Clarence Clemons, and Flaco Jiminez.  However, these releases proved to be less successful than he’d hoped they’d become, and in an emotional TV statement, he declared his clear intention to retire from the music scene. At this stage, he wanted to devote more of his time to his daughter Lola, as well as his second, third and fourth passions, respectively: drawing. painting and poetry.  However, his absence was short-lived, as the man was simply born to be on stage, and in the spotlight, so he made a much-publicised comeback with a new compilation, Saturday Night - 1975-1984, and another live album, Saturday Night Live (Arcade - 1992).

1994 was to become yet another great year for Brood.  With the release of a new book, a new CD, Fresh Poison (Sony - 1994), and a new movie, Rock’n’Roll Junkie, Brood once again was revelling in the long-awaited exposure and publicity.  His 50th Anniversary in 1996 was a simulcast event which the entire country was watching via the television and the World Wide Web!   Another album was also released, featuring an all-star anniversary single, performed by the Netherlands’ "who’s who" of rock and pop music - as a gift and a token of appreciation and recognition to Herman Brood.

Herman Brood jumped to his death from the rooftop of Amsterdam's prestigious Hilton hotel in July 2001. 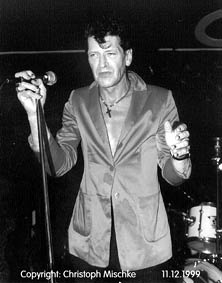 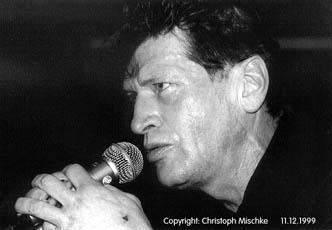