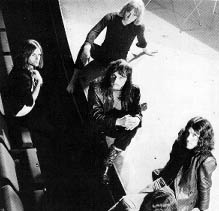 Cuby and the Blizzards (mostly referred to as C+B or Cuby + Blizzards) from Grollo in the province of Drente are one of the longest lasting Dutch bands and the most successful blues band the country has ever sprouted.

The band started out in 1962 as The Rocking Strings with Eelco Gelling (g), Nico Schröder (b), Hans Kinds (g) and drummer Wim Kinds. The next year Wim Kinds was replaced by drummer Dick Beekman. In 1964, they changed their name to Cuby and the Blizzards after adding vocalist Harry "Cuby" Muskee (v, h) who had played upright bass in the Old Fashioned Jazz Group. Bassist Willy Middel came in on bass later that year. In 1965, they released their first single for CNR, “Stumble And Fall”, in a raucous R&B style reminiscent of the early Rolling Stones. They were then picked up by Phonogram Records and recorded a couple of R&B/freakbeat singles, some of which reached the lower regions of the charts. Hans Waterman (ex-René Five) had by then joined them on drums when Dick Beekman had left for The Ro-d-ys (apparently over rows over money).

Their breakthrough came when they released their first album, “Desolation”, late 1966, which contained a lot of blues numbers such as Eddie Boyd’s “Five Long Years” and John Lee Hooker’s “Hobo Blues”. Pianist Henk Hilbrandie of the Old Fashioned Jazz Group joined the band for this LP, but shortly afterwards Herman Brood (ex-Moans) became the permanent piano player, replacing rhythm guitarist Hans Kinds, who’d been drafted into the army. However, after two months, Kinds was medically discharged from the army and rejoined the band, who were now a six-piece. After just a few gigs, it became clear that playing as a sextet wasn't going to work out, but nobody had the nerve to tell Kinds he had to leave. According to the legend, Eelco Gelling told Hans Kinds one night in a bar that if he wouldn't buy the next round (for the whole band) right there and then he'd be ousted. Gelling did this knowing Kinds was a miser and never bought rounds at bars. So Kinds snuck out the door and out of C+B. Later he returned as a road manager, but quit when he discovered that the band was always late for concerts.

In March 1967, the Blizzards backed Van Morrison on a tour of The Netherlands (with C+B opening the show). Morrison would leave for the USA after this tour and asked Eelco Gelling to join him, but the latter declined. Rumours abound that John Mayall considered Gelling as a replacement for Peter Green in The Bluesbreakers.

When Herman Brood was arrested in a drug bust late 1967, the band fell apart. Eelco Gelling, unhappy with Muskee’s autocratic leadership, started rehearsing with Hans Waterman, Jaap van Eik (b, ex-Blues Dimension) and Full House singer Sjoerd van der Duim. Harry Muskee tried to continue with Middel, Brood (who was in prison at the time) and the reinstated Dick Beekman. When it was announced that “Desolation” had earned C+B an Edison award (the Dutch “Grammy”), the record company coaxed Muskee and Gelling back together. The line-up was completed by Beekman, van Eik and Herman Brood. Willy Middel left the music business and Hans Waterman later emerged in Solution.

Late 1968, Beekman (to join Livin’Blues) and van Eik (to return back to Blues Dimension) were fired for erratic behaviour and replaced by Hans Lafaille (d) and Herman Deinum (b), both from Blues Dimension. The band called themselves Cuby’s Blues Band for a while (although never on records). A few months later, Herman Brood (who was incarcerated again, this time for shoplifting) was replaced by yet another Blues Dimension member, Helmig van der Vegt. This line-up remained stable until 1972. By then the band had changed to a more blues-rock oriented sound with jazzy influences. In 1971, they had been temporarily augmented by a horn section of Ruud van Dijk (s) and Bas Munniksma (f, s). Hans and Herman joined Rob Hoeke’s band in 1972 and Helmig left the rock scene to accompany entertainers. The next year Harry Muskee, Eelco Gelling, Hans Kinds, Willy Middel, Hans Waterman and Herman Brood did a farewell gig, followed in January 1974 by another one, this time televized and recorded for an album release (“Afscheidsconcert”).

Harry and Eelco remained musically active in the 70s with a new project, Red White & Blue. In 1975, when it turned out that Red White & Blue wasn't quite working out, it was decided to reform C+B, albeit with a new line-up: Harry & Eelco and from Red White & Blue: Lou Leeuw (b, ex-Rocking Tigers), Frank Nuyens (g, ex-Q’65) and drummer Mels Bol (ex-Fontessa). Early 1976, Piet de Leeuwe (o, p, ex-Child Of Nature and Toermalijn) completed the group, but he was soon replaced by old timer Herman Brood (ex-Vitesse) who played on the album “Kid Blue”. During the course of that year, Harry and Eelco parted ways: Eelco went on to tour with Golden Earring. Herman Brood then joined manager “Coach” Jansen to start a solo career that would bring him fame with his Wild Romance, bringing to an end the second era of C+B.

Due to legal problems (cancelled concerts because of Gelling’s departure), Harry had to carry on as the Harry Muskee Band with Bernard Reinke (g, ex-Capital C), Jan Groenink (dr, ex-Shamrock and Capital C) and RW&B bassist Lou Leeuw (b) adding Martin van Dijk (ex-Parnassus, later in Werk In Uitvoering) on keyboards. This band stayed together till early 1978 releasing one album (“Love Vendetta”). Prior to its break-up, Bernard joined Phoney & the Hardcore and was replaced by Ruud van As (g). Lou went to the Nina Hagen Band and then Phoney & the Hardcore. Groenink joined Shakey Sam’s Blues Band. For the next two years, Harry Muskee was on the dole with a huge tax debt.

When in 1984 first Paul Smeenk (who left the music business) and then Hans Lafaille and Lou Leeuw quit, Harry Muskee decided to drop the horn section and get in new musicians. The Gang was joined by Gino Jansen (b, ex-Fox the Fox), Gert-Jan de Valk (d), replaced by Hannes Langkamp (also ex-Fox the Fox), and David Gardeur (kb). The shock surprise was that Eelco Gelling returned to the fold. In 1985, they added Melle-Jan Kleinsma as second guitarist. During the recordings of “Rimshots In The Dark” in the Spring of 1986, Gelling and Kleinsma were fired because of substance abuse in the studio. They then formed The Blues Connection. This was the end of the 25-year collaboration between Muskee and Gelling. Erwin Java (ex-Wild Honey and Wild Romance) was called in as a stand-in, but he has stayed with Harry Muskee to this day. In 1990, the band name was shortened to Muskee with Harry, Erwin, Gino, Hannes and Roy Kushel (kb). The CD “Cut de luxe” was released, from which the single “Brother Booze” got a lot of airplay.

In 1995, journalist and fan Johan Derksen got Harry Muskee in touch with fan and industrial Henk Aa of Beaphar, who was willing to sponsor a reformed Cuby + Blizzards. This enabled Harry to hire the ex-Blizzards Hans Lafaille, Herman Deinum and Helmig van der Vegt again through the Cuby Is Back foundation. With Java staying as lead guitarist, Cuby + Blizzards started touring and recording again. Around the same time Eelco Gelling started playing in a blues duo with singer Rob Krop (El Kroppo). Between 1996 and 1999, blues harpist John Lagrand (ex-Livin’Blues) played with C+B. Lagrand passed away in 2005 at the age of 56. The new millennium saw Eelco Gelling start performing with his eponymous band. Also a Harry Muskee retrospective 4-CD box called "Blues Traveller" was released. This was followed the next year by a live DVD, "The Jubilee Concert", shot at the Amsterdam Paradiso and a live CD called “Hotel Grolloo” with guest stars including Barry Hay of Golden Earring. That same year (2001) Herman Brood dramatically committed suicide by jumping from the roof of the Amsterdam Hilton. In 2005, Cuby’s 40th anniversary was celebrated with a television documentary “40 jaar de blues”, a DVD, a book and a CD with historic live performances. In 2009, C+B surprised their fans with a stunningly good new album, “Cats Lost”, hailed as their best since “Groeten uit Grollo”, released 42 years earlier.