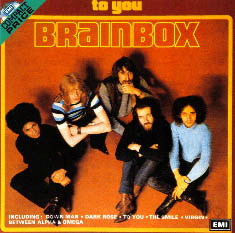 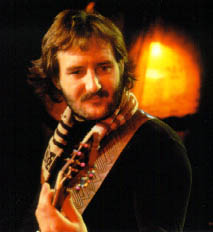 Jan Akkerman is easily the most influential guitarist to have ever come out of Holland.  He's been this country's favourite number one guitarist, according to the Dutch popularity polls, for many years now, and is also the only guitarist to achieve such fame and acclaim abroad.

In the early seventies, Akkerman was awarded by the UK pop publication, Melody Maker, as the "Best guitarist in the world"!  Akkerman has a characteristic style, comprised of several components. The most important ones are rock'n'roll and classical music.  But he is also the one who introduced the swelling violin-like sound in his compositions as a viable part of a song.  This technique was later emulated by many guitarists.  Besides the electric guitar, he also plays classical guitar, lute and piano (on occasion).

Jan Akkerman, born in Jordaan, Amsterdam, started learning guitar at the age of 5.  As a teenager, he played in several local bands, Johnny And His Cellar Rockers being the most well-known of the lot.  This band also featured the young Pierre van der Linden (later in Focus, Trace).  The Hunters was the first group which brought Akkerman success outside Amsterdam.  His virtuoso guitar lick in their hit single, "Russian spy and I" brought him instant recognition all over Holland.  At about this time, aged 18, he recorded his first album, "Talent for sale".  This album mainly consists of covers of famous R&B and rock'n'roll hits such as "What'd I say", "Green Onions" and "Mercy Mercy".

In 1969 Jan founded Brainbox, but left it only after three hit singles.

The following year, he joined Focus.  It was with this band that he bedazzled stunned audiences in England and the U.S. with his magnificent style of guitar playing, as well as songwriting; Jan penned this group's most famous hits, such as "Hocus Pocus" and "House of the King".  Aided by fellow band mates Bert Ruiter and Pierre van der Linden, he recorded his second solo album, "Profile".  Side One of the album contains just one composition, "Fresh Air".  On this track, he demonstrates his fabulous guitar technique in its full glory.  On Side Two he played lute and classical guitar.  In 1973, Jan recorded yet another solo album, "Tabernakel", produced and arranged by George Flynn.  Additional musicians on this album included Tim Bogert and Carmine Appice.  On "Tabernakel", Jan showcased many facets of his talent, however, this record is somewhat bombastic in places.

Following some wrangles with band mates in Focus, and a fallout with Thijs van Leer due to musical differences, Jan left Focus in 1976, to start a solo career.  In 1976 he recorded his fourth solo album "Eli" together with Kaz Lux, ex-Brainbox.  This album was greeted warmly by critics, got into the charts and stayed there for many weeks to come. Akkerman hardly played any solos on this one, but he did create beautiful melodies.  The tour of the Akkerman/Lux band, however, didn't turn out to be quite as successful.  Some gigs in the UK were cancelled as a result.  Akkerman then switched to session work.  In 1977, he played on the orchestral version of Mike Oldfield's "Tubular Bells" together with the Residentieorkest.  "Jan Akkerman" and "Aranjuez" were his further solo efforts in a similar, orchestral, vein, arranged by Michael Gibbs and Claus Ogerman, respectively.  The follow-up, "Live", recorded at the jazz festival in Montreaux, was a rather disappointing effort.  From "Aranjuez" onwards, Akkerman suffered from lack of direction.  On "Jan Akkerman 3" he experimented with funk-flavoured easy-listening.  The production costs of this album were very high, the sales - too low.  It was no surprise then, when Atlantic terminated his contract in 1980.  The following album, "Transparental", was recorded for a new label by almost the same line-up as the best-seller "Eli".  This, second album with Kaz Lux, was sadly not only not distinguished by the quality of the first one, but also turned out to be a complete commercial disaster.  In 1981, many of Jan's fans were unpleasantly surprised by "Oil In The Family", a disco album containing instrumental, Middle Eastern-flavoured tunes.  Almost all instruments were played by Akkerman.  The common consensus was that had sold out. This album was selling badly, just like its successor, "Pleasure Point", a predictable effort with hardly anything new to offer.

Due to the lack of interest, Akkerman signed a new contract with the Deutsche Grammophone Gesellschaft and recorded "It Could Happen To You".  This album, recorded in Copenhagen, was made mostly with the help of Danish musicians. On it, in places, Akkerman reached the same quality level of material, which he had been renowned for a few years back. It turned out to be his best album in years.  Since 1977, Akkerman has not played in any band, nor has he had any stable line up of assisting musicians.  He usually prefers to play with temporary formations comprised of hired session musicians, in Holland and Germany.  On the recent compilation, called "Phenomenon", Jan decided to resurrect his old hit from the Hunters days, "Russian Spy and I".

Jan Akkerman (g, ex-Friendships and Shakin' Hearts) began his recording career in the Amsterdam-based rock'n'roll group The Cellarrockers.  The group also accompanied, a.o., Aart Brouwer and Karin Kent.  Before 1963, their records featured only instrumentals, after - material inspired by The Beatles.  Line-up: Pierre van der Linden (dr, in 1963 to The Mystics and replaced by Sidney Wachtel, to The Hunters), Cor Engelsma (b), Jan Burgers (g), Cor Burgers (g, since 1962) and Hans Kuyt (p).  In 1965, Jan Akkerman joined The Hunters, and the group fell apart.

Jazz-rock studio guitarist; one of the substitutes for Jan Akkerman in Focus, since 1977.