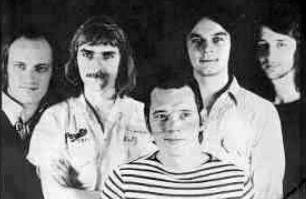 Carlsberg was formed in 1974 by two ex-members of The Bintangs: Arti (or Arthy) Kraayeveld (who'd been in the band Kraayeveld with his brother Frank after they'd left The Bintangs in late 1970) and Rob Kruisman (g, s, v, ex-Ekseption and Supersister, who'd been in the Kraayeveld-less Bintangs in 1971-1973). They got Bart Terlaak (ex-Bismarck and Threshold Fear, who'd played with Rob in Island) in as drummer and André Versluys (ex-Trio Juan Blanco) as bass player.

In 1975, the group released their first single, "Sweet Louise", written and produced by Arti Kraayeveld, who was, however, no longer in the band, as the picture sleeve showed: Kruisman, Versluys, Terlaak and Han Bavinck (g, ex-Mailbag) and Egon Jansen (congas). The latter had left by the time of their second single, "Rock On" (1976).

In 1977, they were dropped by Warners due to the lack of chart success and Bavinck (to Superjones) & Versluys (to Uzi and then Vitesse) were replaced by Japie (Jaap) Castricum (g, also ex-Bintangs) and Gerard (or Gé) van Dooren (b, to Jan Rot's Ratata). This line-up started touring the Dutch club circuit, building a solid reputation as an energetic live band. In 1979, they released their first album for Dureco and a Dire Straits pastiche called "All The President's Men" on a single, which hit the lower regions of the charts. Just after the release of the 1980 album, "Cash & Carry" (containing many songs co-written by Yme de Jong of Selfkick fame), another ex-Bintang joined in, Albert Schierbeek (b). That same year, they released a live album, by which time Burt van de Mey (ex-Meltin' Pot) had replaced Terlaak (to The Two) on drums. Shortly after that, Schierbeek was replaced by Willem Visser, who was, in turn, replaced by the returning van Dooren. After the 1983 album "Loaded", Carlsberg split up, apparently due to problems with the taxman.

Carlsberg frontman Kruisman raised eyebrows in 1984 by reappearing in a supporting role in De Gigantjes with original Carlsberg members Arti Kraayeveld and Bart Terlaak. This jive band (originally started as a fun project in 1982, but recording from 1984 onwards) was fronted by lady singer Mieke Stemerdink (ex-Cupcakes). On bass they initially had Ronald Krom (also an ex-Bintang), but Robert Brondsema became the permanent bassist.

In 1988, Carlsberg did a one-off reunion gig and probably another one around 1994. After the break-up of De Gigantjes in 2000, Kruisman started playing gigs with pick-up bands and sat in with other bands, but a full-fledged Carlsberg reunion was impossible due to the bad health of longtime guitarist Jaap Castricum. Of the other two former Carlsberg guitarists, Arti Kraayeveld is now a painter and Han Bavinck plays in The Leo Koster Band. Gerard van Dooren played with many Dutch top bands like Herman Brood's Wild Romance and Oscar Benton's Blues Band.