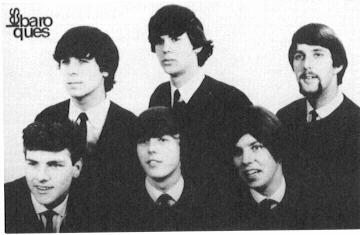 In 1959, this formation from Baarn had already been playing under the names: Modern Teenage Quartet and Hurricane Combo, but they remained unknown until 1965.  After having recorded a handful of excellent singles, they appeared at the Grand Gala du Disque 1966.  Members at that time were: Frank Muyser (g, s, h) Rene Krijnen (o, p) Robin Muyser (b) Gerard Schoenmakers (Gary O'Shannon, v), Hans van Embden (g), Raymond Geytenbeek (v,dr).  In 1967, Ferdy Karmelk   temporarily joined the group, playing guitar. Michel van Dijk (ex-Minds, Mads and James Mean) replaced Gerard, who started his own Gary O'Shannon Group.  In 1969, after a considerable period of inactivity, the group was in imminent danger of breaking up.  Still for a few more months, it featured the line-up of: Ferdy Karmelk (g, ex-Tee Set) Bart Terlaak (dr, ex-Daddy's Act) Jan Dankmeyer (b, ex-Flower and Nonesuch), and also Michel, Rene and Frank.  When the group finally folded, remaining members Jan, Ferry and Bart changed the name to Island.

The group Island, which recorded two singles for Imperial, featured two entirely different line-ups. The line-up on the first single, was, in fact, a continuation of Les Baroques: Ferdy Karmelk (g, in 1970 to Bismarck), Jan Dankmeyer (b, to Bismarck), Bart Terlaak (dr, to Bismarck) and Rob Kruisman (v,s, ex-Ekseption, in 1970 to Modesty Blaise). In 1970, a totally new Island came into being. This lineup had already been together for a year by then, under the name of Jasper Mule; they came from Nijmegen: Rob Vunderink (g, ex-Counts, to Cobra), Winston Gawke (v, sang in 1969 in a bogus line-up of the Yardbirds in Germany, to Cobra), Joop van Kesteren (b, ex-Counts, to Grass) and John Lejeune (dr, ex-Corporation, to Livin' Blues).

Heavy rock band based in The Hague (originally from Nijmegen). During their record-making period, (from 1970 till 1973), they consisted of: Winston Gawke (v, ex-Island), Michiel Driessen (dr, later to Livin' Blues), Paul Heppener (b, ex-Confrontation, in 1972 to Centaur and replaced by Pim van der Linden, ex-Rob Hoeke) and Robert Vunderink (g, ex-Island, in 1972 to Centaur and replaced by Ben de Bruin, ex-Rob Hoeke). Just before they disbanded in 1973, Frank van Nimwegen (g, to Twelve O'Clock) joined for a short time. In 1978/79, the group re-emerged once again: Rob Vunderink (g, to Diesel), Johan Korringa (b) and Hans Adelaar (dr, ex-Sfinx, to More).

Gary was Gerard Schoenmakers, who was replaced in 1966 as the lead singer in Les Baroques by Michel van Dijk. Gerard had left to join the army then, but when he returned from his duty, he wasn't admitted back into the group. He then created his own outfit, without much success, however, together with Ferry Maat (p, ex-Dean Allen Set).