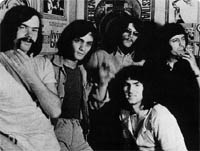 Livin' Blues was one of the best Dutch blues bands. Many people think the band's name came from the American magazine called Living Blues, but that wasn't established until 1970. Former members of the band claim it was based on the name of an American theatre group called Living Theatre.

They evolved in 1967 from Andy Star & the Stripes with Ted Oberg (g) and Ruud Franssen (b) and then added Björn Pool (v) and Niek Dijkhuis (d). In 1968, they took on board the blues duo Indiscrimination with John Lagrand (blues harp) and Nicko Christiansen (v, s), the latter replacing Pool. During the same year, Gerard Strötbaum replaced Franssen and Cesar Zuiderwijk (ex-Hu & the Hilltops, to Golden Earring) came in on drums. The band started getting more and more attention, resulting in a record contract with the mighty Phonogram (who distributed labels like Decca and Philips). They opened a show for Fleetwood Mac during a small winter tour of 1969.

In 1970, Smitskamp was replaced by Ruud van Buuren (ex-Groep 1850, to Long Tall Ernie & the Shakers). When Zuiderwijk joined Golden Earring, Dick Beekman (ex-Cuby + Blizzards and Ro-d-ys) was next in the long line of drummers to join the band. Livin' Blues seemed to change drummers on a yearly basis. After "Wang Dang Doodle" became an international hit, the band started touring Europe, one highlight being their appearance at the Palermo Pop Festival in Sicily. Then John Le Jeune (ex-Island) took over the drum stool, but he also lasted for just one album. The band had another international hit with "LB Boogie" and made their first visit to Poland, where they'd become one of the most successful bands ever.

Le Jeune left for the Schick Band and was replaced by Arjan Kamminga, who was forced to quit not long after the release of "Rockin' At The Tweedmill" (recorded in England and produced by Mike Vernon) due to back problems. He would later resurface in Mark Foggo & Secret Meeting. In 1973, Englishman Kenny Lamb became the last drummer of the first era of Livin' Blues. The album "Ram Jam Josey" was again produced by Mike Vernon who'd also recommended Lamb (ex-Jellybread, a British blues band recording for Vernon's Blue Horizon label).

In 1974, “Mark I” Livin' Blues fell apart. John Lagrand joined Water, Nicko Cristiansen formed Himalaya, Kenny Lamb returned to England and Ruud van Buuren joined Long Tall Ernie & the Shakers. Ted Oberg had to continue with Livin' Blues because their manager (Ted's mother!) had signed new contracts with Ariola and Grandad Music. John Fredriksz (ex-George Cash and Q'65, the singer who always seemed to come in when a band's heyday was over) became the new vocalist. They also took on board Paul Vink (kb, ex-Finch, to Limousine), but he only lasted a few months. The line-up was completed by the returning Henk Smitskamp (b, from Shocking Blue), Ronnie Meyjes (g, ex-Brainbox) and Michel Driesten (d) and had a disco hit with "Boogie Woogie Woman", a far cry from the earlier blues-rock sound. By the time the album "Live '75" was recorded, Meyes and Driesten had disappeared and Cor van de Beek (also from Shocking Blue) was the drummer.

The 1976 line-up was: Ted, Johnny, André Reynen (bass, ex-Sympathy and Brainbox) and Jacob van Heiningen (drums, ex-Galaxis, replaced by Ed Molenwijk, ex-Dizzy Daisy, to Casino). In spite of the internationally successful album, "Blue Breeze" (1977), the band were without a recording contract by 1978. Jan Piet Visser (h, ex-Houseband) joined in 1979, but a year after that the core of "Mark I" Livin' Blues reunited for the 1980 Haagse Beatnach: Oberg, Lagrand and Christiansen were joined by Evert Willemstijn (b) and Boris (Bo, Beau) Wassenbergh (dr, ex-Cashmere, to The Zoo). That line-up started touring again, but due to the lack of interest in the blues music, Livin' Blues slowly ground to a halt in the first half of the 1980s. In the meantime, Johnny Frederiksz, André Reynen and Jan Piet Visser formed Nitehawk. When that band also turned out to be unsuccessful, Ted Oberg formed the J&T Band (Johnny & Ted) with Frederiksz, adding ex-Finch members Peter Vink (b) and Fred van Vloten (d).

In 1986, John Lagrand and Nicko Christiansen reformed Livin' Blues and, for the first time since 1967, Ted Oberg was not present. Other members were: Joop van Nimwegen (g, ex-Q'65 and Finch), Willem van de Wall (g, ex-Himalaya), Aad van Pijlen (b, ex-Freelance Band and Himalaya) and Art Bausch (d, ex-Barrelhouse, ex-Oscar Benton, and founder member of Blue Planet). After one unsuccessful album, "Now", Lagrand left to join the Muskee Gang and Christiansen got a new line-up together. However, the rights to the name Livin' Blues were owned by Ted Oberg's mother and Christiansen had to call the band New Livin' Blues. Just like all preceding line-ups, New Livin' Blues went through many changes, which are impossible to document (mainly due to the lack of press coverage and record releases). On the CD "Out Of The Blue" (1995), the line-up was: Christiansen, Loek van der Knaap (g), Frank Buschman (b) and Elout Smit (d).

On 30th June, 2005, John Lagrand died at the age of 55 from emphysema. Christiansen continued as The Livin' Blues Experience with Loek van der Knaap (g), Yaroon Vanniele (bas), Kees van Krugten (d) and Francois Spannenburg (blues harp). In 2009, Livin' Blues was voted as the "best international blues band" by readers of the Two Blues magazine in Poland. Ted Oberg has called his band Oberg once again, although it is now fronted by female singer Liane Hoogeveen. The other members are: Mick Hup (g, replaced Will Sophie), Nico Heilijgers (b) and Paul Damen (d).