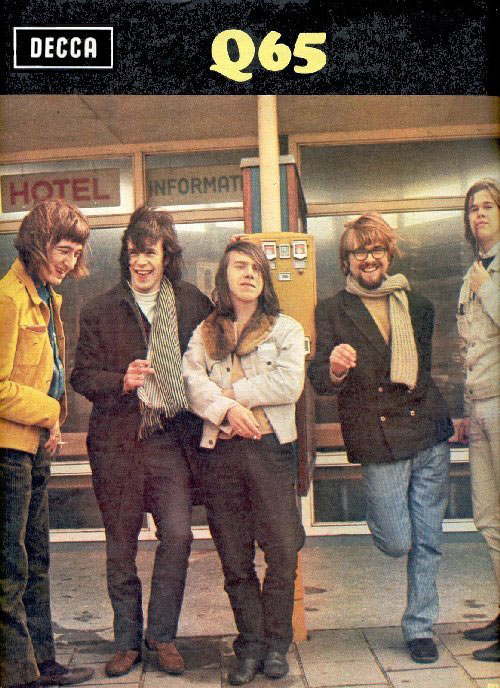 The Den Haag (The Hague) group Q'65 played raw garage-style music and were often compared to their English counterparts, The Pretty Things. They were renowned for their ramshackle English lyrics and funny pronunciation of singer Wim Bieler.

They evolved from Leadbelly's Ltd., whose drummer was Jay Baar. At some point Dihl Bennink (later in the Tee Set) was also a member of that band. In 1964, Wim Bieler became the lead singer. Then guitar players Joop Roelofs and Frank Nuyens joined in and in (surprise!) 1965 they changed their name to Q'65. From auditions for a bass player Peter Vink was chosen as he could play the bass lick from The Zombies' "She's Not There".

In early 1966, they debuted with the Peter Koelewijn-produced "You're The Victor", which narrowly missed the Top 10. They tried to draw attention to the release of "The Life I Live" by sailing to England in a rubber motor boat, but a popular magazine revealed pictures where the band was towed by a ship full of photographers. Also some of the band members got seasick and spent most of the crossing lying in a bunk aboard the larger vessel. But the stunt worked out well in the end, as they got back into the rubber boat close to Scheveningen beach, where a crowd was awaiting them. "The Life I Live" proceeded to reach #5 in the charts.

Later that year, they released their first album, "Revolution", which over the years has become an internationally acclaimed garage-rock classic. It included original material, but also covers like Otis Redding's "Mr. Pitiful" and blues classics "I'm A Man" and the 14-minute plus "Bring It On Home", characterized by Bieler's moaning "Peeeeeeeeeeeee-buh!" ("baby"). The standard of playing was quite amateurish (not one good guitar solo on the enitre album), but in hindsight the Q epitomised everything that made garage rock attractive. In late 1966, they had another hit with "I Despise You", the flipside of which, the ballad "Ann", would become one of the most requested songs in radio programs and as such has become one of the band's classics (it was even re-released as an A-side after the band split). In 1967, dissension set in. Some members (especially drummer Jay Baar) were heavy drug users and also the alcohol intake of the band was legendary. In late 1967 they split up after the last three singles had failed to repeat the success of their string of hits from 1966. The best record from the period is the EP, “Kjoe Blues”, which showed they could play the blues like a (freak)beat group, but lacked the instrumental dexterity of bands like the Bluesbreakers or Fleetwood Mac. Jay Baar was arrested in a drug bust and went to jail. Willem Bieler joined the army, Peter Vink formed Big Wheel and Joop Roelofs went to work as a social worker. In 1968, Jay Baar and Frank Nuyens formed Circus.

In 1969, Phonogram released the LP, “Revival”, which contained Q'65 hits, album tracks, the outtake "Fairy Tales Of Truth" (apparently a Circus track sung by Willem Bieler) and three tracks by Circus. The renewed interest in Q'65 led to an offer by Negram Records and the band decided to reform in early 1970. Original members Bieler, Roelofs, Nuyens and Vink were joined by drummer Beer Klaasse (ex-Groep 1850 and Big Wheel) as Jay Baar was playing in Tantalus by now (and the Q didn't want to risk another drug bust anyway). In the following years the band released two albums and the single, "Sexy Legs", was a small hit, but they never reached the heights of the '66-'67 era. Slowly the band started to fall apart: Frank Nuyens left in 1971 to record a solo album as Rainman. He would later appear in Red White & Blue, Cuby + Blizzards and The Freelance Band. He was replaced by Joop van Nimwegen (ex-Ex). Then Wim Bieler left to form his own band called Dambuster. Johnny Frederiksz (ex-George Cash) came in as a singer and the band name was changed to Kjoe (Dutch phonetic for Q). In 1974, the band called it a day.

Peter Vink formed Finch with van Nimwegen, the band that would record two albums of instrumental rock and draw worldwide attention. During the legendary The Hague Beatnach on 13th June 1980, the original line-up of Bieler, Roelofs, Nuyens, Vink and Baar played together for the last time. Their performance was awful, in fact, so bad, their two tracks selected for the resulting 2LP had to be re-recorded in the studio. Yet offers to tour started pouring in. But Nuyens and Baar declined, so the band got in former Finch members Joop van Nimwegen (g) and Fred van Vloten (d). The latter was then replaced by 1970-1974 Q drummer Beer Klaasse. This line-up balanced between the oldies circuit and club gigs. One of the highlights was a tour with their alter egos, The Pretty Things, in 1987. Slowly members started drifting out again and by 1988 the line-up was Bieler, Roelofs, Rinus Hollenberg (g), Rene van Spanje (kb), Rick Finck (b) and Rob Louwes (d). By the end of the decade the Q had dissolved.

In 1990, Jay Baar died (his age was unknown, presumably he was born in 1947). In 1997, Willem Bieler, Frank Nuyens and Joop Roelofs started playing together again and did some unplugged gigs. An acoustic CD, "Trinity", was released. The band then attempted a Q'65 revival in 1998, but Joop Roelofs opted out, declaring he was "too old to be on a stage in leather trousers pretending to be young". He sold all his guitars, but still appears whenever there's a meeting of 1960s beat musicians. So they recruited Eric van de Berk (keyboards), Dick Schulte Nordholt (bass, ex-Meteors and Gruppo Sportivo, died 2006) and ex-Cuby + Blizzards and Solution drummer Hans Waterman. When Wim Bieler died in 2000, aged 53, from a heart attack, it was the end of Q'65. In 2008, the three living members, Roelofs, Nuyens and Vink, appeared together during a ceremony to present the restored Jay Baar drum kit, known from the "Revolution" album cover, to the Rock Art museum.

Well I take everything I want
The girls are fighting for me
But every time that I take one
They're indisposed, poor old me
Once we were on Joop's wedding
We drinked and smoked all night
At 12 we were all thrown out
'Cause the house was changed in a crowd
("The Life I Live")