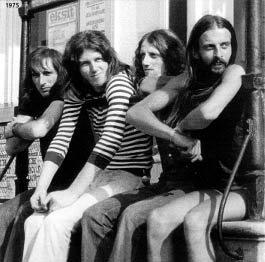 Finch was founded in 1974 by ex-Q'65 members Peter Vink (b) and Beer Klaasse (d). As they had a keyboard player called Paul Vink (ex-Twelve O'Clock and Swinging Soul Machine, no relation) they decided to call themselves Finch (vink is Dutch for finch, the bird). The band's instrumental music was dominated by lead guitarist Joop van Nimwegen, who'd also played in Q'65 and had just left Cobra. Initially the band had an unknown singer and a second drummer (Marco Vrolijk, ex-Supersister), but they settled on an instrumental four-piece. Before they recorded their first album (produced by Roy Beltman), Paul Vink left for Livin' Blues and was replaced by Clemens (Cleem) Deetmeijer. The first album hardly sold at all, but got a lot of attention in the international music press and, as a result, "Glory Of The Inner Force" was even released on Atlantic in the USA. Over the years it has become a collector's item in prog-rock circles. A second album followed, but just after its release Deetmeijer was replaced by Ad Wammes (ex-Purple Haze), who'd played with Joop van Nimwegen in Ex. Late 1976 - during the recording of the third album - Beer Klaasse also left to be replaced by Hans Bosboom (ex-Alveo, Chafing Blues and Blues Session). The album was produced by Englishman Sandy Robertson, but in the days of punk and new wave there appeared to be hardly any demand for progressive instrumental rock. Bosboom made way for the new drummer, Fred van Vloten (ex-Range), like van Nimwegen and Wammes also from the Utrecht area, making Finch almost an entirely Utrecht-based band. This was underscored by the arrival of second keyboard player Rinse Posthuma (also ex-Range). Late 1978, after a tour with the Jan Akkerman Band, Finch called it a day. Vink and van Nimwegen would later play together in the reformed Q'65.