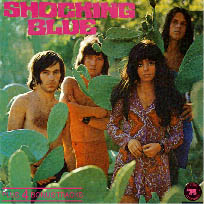 Many don't know it, but the Hague group Shocking Blue were already making records before Mariska Veres entered as their singer in 1968. During that initial period (1967-68), the lineup was: Robbie van Leeuwen (vocals, guitar, ex-Motions), Fred de Wilde (vocals, ex-Hu & Hilltops), Klaasje van der Wal (bass) and Cor van Beek (drums, ex-Sect). In 1968, Fred was replaced by Mariska, who had already made a solo single in 1965. She was discovered by manager Cees van Leeuwen at the jazz festival in Loosdrecht. She already had some group experience, with the Bumble Bees.

With "Venus", Shocking Blue scored an international hit (number one in the U.S.), but, unfortunately, the decay of the group began shortly thereafter.  Constant changes in the lineup were to blame, for one thing: in 1970, Leo van de Ketterij came on board, to boost the group as the second guitarist, but he left less than a year later. Also in 1971 Klaasje, who departed to join Antilope, was succeeded by Henk Smitskamp, ex-Sandy Coast.  In 1973 Robbie withdrew himself from the position as a lead guitarist, and on stage had to be replaced by Martin van Wijk, ex-Jupiter.

In 1974, the group broke up.  Robbie formed Galaxy Lin, a short-lived jazz-rock outfit, and later - another studio outfit Mistral; Cor and Martin went to Lemming; Mariska continued making a number of solo records. Henk went on to join Livin' Blues.

Mariska started out in 1964 as a vocalist in Les Mysteres; after that she also sang in the Blue Fighters (1966), Danny & Favourites (1967) and the Motowns (1967). In 1968, she was asked to join Shocking Blue, the outfit in which she found fame all over the world.  After the group disbanded in 1974, Mariska made a number of solo-records, sang in Mistral (1978) and also participated in the ill-fated Shocking Blue reunion in 1980.

Beat group from The Hague; in 1964, they won the first prize at the talent hunt in Meerrust-Warmond.  Also toured Germany.  The lead singer was Mariska Veres.

The Blue Fighters from The Hague released one flexi-EP. The line-up featured: John Merano (v), Henk Scheepstra (dr), Ed Koetsier (b, to Nicols), Ton van Oudheusden (g) and Rob Poerbo (g).  In 1966, they accompanied Mariska Veres (ex-Mystčres) for a short while.  A year before that, they took part in
the Cabaret der Onbekenden.

Although glibly labelled by many as one-hit wonders - albeit international ones, due to the US chart-topping success of 'Venus' - Shocking Blue have recently had their music rediscovered and reassessed by critics and public alike.

Though the band reached the peak of their commercial success at the start of the Seventies, their origins lay further back in the diverse, exciting and woefully ignored Dutch scene of the mid-Sixties.

The Dutch beat boom started when Johnny Kendall and the Heralds' version of 'St James' Infirmary' charted in late 1964. Prior to that, most of the home- grown acts to find success had either been wholesome teen stars or guitar instrumental acts in the style of the Shadows.

Many of the leading lights of the beat boom got their start in these guitar groups. In several instances, the groups themselves evolved and changed styles: ZZ and the Maskers dropped the leader's name for several singles and backed Chubby Checker when he was based in the country (after marrying the Netherlands' representative in a Miss World contest!)

While major cities like Amsterdam and Rotterdam all had bands of note, the Hague was undoubtedly the Netherlands' musical hotbed. Almost everything was covered, from cultural outlaws such as Q65, through beat groups such as The Hunters (Focus star Jan Akkerman's first major act) through many pop acts the Sandy Coast and Golden Earring (who at this time could be compared with the Hollies). But one band alone captured the style and energy of British Mod acts like the Small Faces and the Action: that was the Motions.

Robbie van Leeuwen, guitarist, songwriter and effectively leader of Shocking Blue, had previously held a similar position in the Motions in their early hit making phase. Those hits included 'It's Gone', 'Wasted Words' (a paean to Dr. Martin Luther King), 'Every Step I Take' and 'Everything That's Mine' the latter one of the finest slices of Mod/Art Pop produced anywhere in the world.

The Shocking Blue story effectively started when Van Leeuwen left the Motions in 1967 due to conflicts with lead singer Rudy Bennett. He recruited members from other Hague bands for his new group: the line-up for the first Shocking Blue singles, up to and including the first hit, 'Lucy Brown Is Back In Town', was Van Leeuwen (guitar), Fred de Wilde (vocals), Klaasje van de Waal (bass) and Cor van Beek (drums). The single charted well, things were about to change.

About the same time as Lucy Brown's release, fellow Hague band Golden Earring had hit the jackpot with the pure bubblegum of 'Dong Dong Di Ki Di Gi Dong'. A band was hired to play at the party they held to celebrate their first Number 1; named the Bumble Bees, they were fronted by a strong and striking female vocalist. Shocking Blue's manager and publisher both attended the party, and both felt certain this singer would be ideal for their band. The woman in question was Mariska Veres.

The new line-ups' first single, 'Send Me A Postcard', was a runaway success in the Netherlands, while the follow-up 'Long Lonesome Road', also made the domestic Top 20. But it was the third single with Veres that would seal the band's fate. 'Venus' made Number 3 in Holland, but significantly topped the charts in several countries, including Belgium, France, Italy, Spain and Germany.

The record came to the attention of a newly formed American record label, Colossus. The label's head Jerry Ross signed Shocking Blue for the States and was rewarded when 'Venus' hit the top there in February 1970. Ross also signed two other Dutch acts, the Tee Set (formed by former After Tea singer Peter Tetteroo) and the George Baker Selection: the Tee Set's 'Ma Belle Amie' also rose high in the US charts to Number 5, while Baker's biggest hit for Colossus, 'Little Green Bag', was later used on the soundtrack of the 90s film "Reservoir Dogs".

Shocking Blue's follow-up to 'Venus', 'Mighty Joe', made Number 1 in Holland and charted almost everywhere its predecessor had. But the international success 'Venus' had appeared to herald failed to materialise. Although the band was still releasing excellent and often innovative singles and still charting in Europe, Van Leeuwen was dissatisfied and increasingly frustrated by the limits of Shocking Blue's chart success. When mainland European bands once again returned in vogue on the back of ABBA's Eurovision victory, the band failed to capitalise and eventually split.

Mariska Veres continued as a solo singer, Van Leeuwen producing her on songs like 'Too Young' and 'Loving You' (both included as bonus tracks on this compilation), he also enjoyed local success in the mid-Seventies with a group, Galaxy Lin.

But Shocking Blue returned to the fray, albeit for one night only, in 1984 at a Back to the Sixties festival in Den Bosch along with the surviving members of Q65, the Shoes and members of other Hague groups. It proved to be a night to remember: Van Leeuwen still had style, and Veres still had one of the greatest female rock voices: the band's interpretations of Jefferson Airplane's 'Somebody To Love' and 'White Rabbit' were just as strong as their own songs.

The continuing interest in Sixties music, along with the realisation that bands whose mother tongue is not English are as musically valid as British, American and Antipodean acts, has led to an increasing appreciation of Shocking Blue's music. Their songs receive radio and club play, while bands have also covered the songs: the most significant re-recording came from grunge supergroup Nirvana, whose debut release on the Sub Pop label was a version of 'Love Buzz' that's rather different to the one you hear here. 'Venus', meanwhile, has proved to have a life of its own. It's been used in television advertisements, while Bananarama's version equalled the original chart position in the US in 1986.

Photos of the band indicate that Shocking Blue seems to trade on Veres' striking, essentially female appearance. Yet it fails to smack of exploitation simply because of the sheer power of the woman. Much has been made of her ancestry - part-German, part-Hungarian Gypsy, and the resulting dark, sultry features. Here was a woman in control. Her voice had and still has a strength and quality that puts her on a par with other powerful female contemporaries like Julie Driscoll and Grace Slick. Maybe the time has come to acknowledge this fact as we enjoy a collection of Shocking Blue classics.

Lynne Aldridge
Taken from the liner notes of the 1994 CD, "Best of Shocking Blue", Connoisseur label.

Submitted by: Adri Verhoef (a3@a3.xs4all.nl-removespam)
Back to Alex's Home Page


Back to the Nederpop index