The Motions from The Hague were one of the bigger groups of the 1960s Dutch beat explosion. They were formed in 1964 from the remnants of Ritchie Clark and the Ricochets and went on to become hitmakers for the next several years. The Walker Brothers even recorded "My Love Is Growing", a song The Motions' Robbie van Leeuwen had written (the Motions had recorded it as a flipside to "Why Don't You Take It") and the Walkers' manager John Stewart produced The Motions' second LP, "In Their Own Way". The single, "Freedom", reached the lower regions of the American charts in 1969. This song was sampled in the 1990s by Japanese band Tokyo No.1 Soul Set on their track "Sunday". Although the group disbanded in 1971, the most important members have met each other again & again in new bands such as Crossroad, Greenhorn, Jupiter and Galaxy Lin.

From 1964 to 1967, the line-up was stable: Rudy Bennett (i.r.l. Ruud van de Berg - vocals, earlier as Ritchie Clark and the Ricochets), Robbie van Leeuwen (guitar, ex-Atmospheres & Ricochets, later the founder of both Shocking Blue and Galaxy Lin), Henk Smitskamp (bass, ex-Willy & Giants, later to Livin' Blues) & Sieb Warner (i.r.l. Siebolt Warntjes - drums, ex-Ricochets, later to Golden Earring). This line-up had a string of hits in The Netherlands during 1965 and 1966 with singles like "Wasted Words" and "It's The Same Old Song". Their first album, "Introduction To The Motions", is considered one of the best albums of the era.

Early 1967, Robbie left to form Shocking Blue and was replaced by Gerard Romeyn (ex-Tee-Set, later with Nico Haak, Image). Late 1967, Henk Smitskamp was ousted in favour of Leo Bennink (ex-Mack and Jay-Jays). A fifth member was found in multi-instrumentalist Jan Vennik (sax, flute & organ, also ex-Jay-Jays, later to Rob Hoeke & Ekseption). When in mid-1968 Gerard Romeyn and Jan Vennik were busted for posession of marijuana and incarcerated, the band took in Paul van Melzen (ex-Haigs, later in the Mailer McKenzie Band) on bass and Bobby Green, (i.r.l. Bob van der Vaart - organ, ex-Bobby Green Selection, also to Fisher & Friends). Bennink switched to guitar. This line up recorded the album "Electric Baby" for Decca in 1969. The band then suffered another setback by the departure of drummer Sieb Warner to rivals Golden Earring (who'd by then just dropped the 's' off Earrings). His replacement was Han Cooper (i.r.l. Han Gordinou de Gouberville). The last line-up of the group (up until 1971) was: Rudy, Leo, Paul, Bobby and Han. They did a few gigs in England and went on a trip to the USA (only playing at The Scene Club in New York), but international success eluded them. They recorded one more album for the Simogram label of supermarket chain Simon de Wit, but split up soon afterwards.

After the breakup, Rudy Bennett, Bobby Green and Gerard Romeyn all released solo singles. Bennett later joined Robbie van Leeuwen in Galaxy Lin. In 1992, The Motions did a one-off reunion gig for Veronica television with the original line-up, joined by Leo Bennink on guitar and keyboards. Rudy Bennett regularly does Golden Oldies gigs with pick-up bands under the moniker of The Motions, often including Leo Bennink. Henk Smitskamp still plays with Willy & his Giants.

RITCHIE CLARK AND THE RICOCHETS 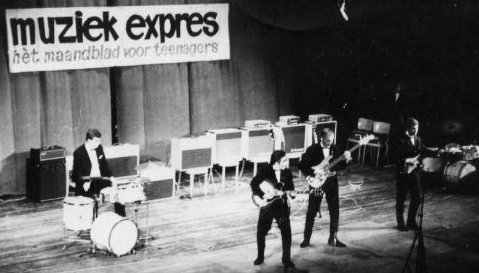 The Ricochets on 8 August 1964 opening for The Rolling Stones at the Kurhaus, Scheveningen, with Sieb Warner on drums and Robbie van Leeuwen, second from left

A beat group from The Hague whose main claim to fame was that they opened the show for The Rolling Stones on 8 August 1964 at the Kurhaus in Scheveningen - only to find the concert hall smashed to smithereens about one hour after their performance (the Stones played for about 20 minutes before the police ended the concert). Ritchie was i.r.l. Rudy Bennett. The group was formed in 1963, featuring members: Rudy Bennett (v), Hans Emmerik (g, in 1964 replaced by Robbie van Leeuwen), Hans Hoogduin (b), Ton Lamet (g) and Gerard Melkert (dr, replaced by Sieb Warner). They released two singles, one vocal and one instrumental, as the Ricochets. Rudy, Sieb and Robbie found success in 1965 with the Motions.

The most important names featured in the swinging Bobby Green Selection, an up and coming band from from The Hague were organist Bobby Green & drummer Han Cooper (Couberville).  When the group disbanded in 1969, they went to the Motions.  The recordings made after 1969 are solo records by Bobby. In 1977, the Selection reunited for a short spell.

An interesting jazz-rock outfit that used mandolin as their main instrument, instead of guitar.  The group was launched in 1974 by Robbie van Leeuwen (vocals, mandoline; ex-Shocking Blue) and existed for two years.  Other featured members: Rudy Bennett (vocals, ex-Jupiter), Dick Remelink (sax & flute; ex-Ekseption, in 1976 to Trace), Hugo van Haastert (mandoline; left the group temporarily in 1975 to work with his own band, Triad, but returned soon thereafter; his replacement was Hans van Vos, ex-Lemming), Peter Wassenaar (bass, ex-Blue Planet) & Peter Rijnvis (drums).  In 1975, Skip van Rooy (organ, piano) was leading the group for a short while, but he left for the Buffoons.