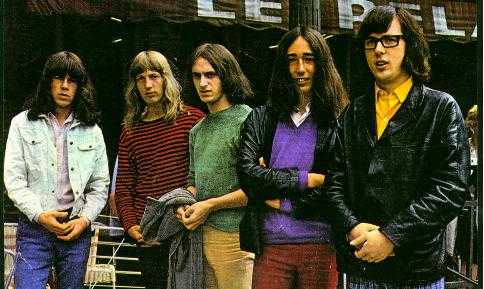 The Outsiders came from Amsterdam: started out a local band from Oost, their homebase being "Las Vegas" on the Korte Nieuwendijk.  A disreputable body of hustlers and trouble-makers was constituting their typical audiences outside the city. This ill-famed body was notorious for turning places upside down and, therefore, the band was boycotted in many towns.

The group started out in 1960 as Jimmy Revon (Leendert Groenhof) & the Outsiders; its members also including: Wally Tax (vocals, guitar, ex-Victors), Gerrit Groenhof (drums, once in a while replaced by Pierre van der Linden!), Piet Zandstra (drums) & Ronald Splinter (guitar). Despite their scanty musical skills, the Outsiders gradually became popular amongst the country's youths: in 1966, they even played the support slot to the Rolling Stones in 's-Hertogenbosch! Under the guidance of Willem Duys, they recorded their first LP, on which the technique of recording instrumental tracks back in those days can be clearly heard: they were speeded up, after which the vocals were dubbed in.

The culminating point came in 1967: a few big hits, Wally's solo records and appearances in Paris with Little Richard. Even in France the group had its own fanclub. On their 1968 LP one can hear the band's remarkable progress.

Albert was replaced in 1968 by multi-instrumentalist Frank Beek (ex-Double Dutch). The Outsiders broke up in 1969; Wally and Leendert formed Taxfree, after which Tax went solo, accompanied by groups like Bamboulee and the Watermen.

Wally Tax already made solo records during his tenure in the Outsiders. After his group Taxfree disbanded, he went solo and was accompanied by Bamboule (1972), George Cash (1973), Watermen (1973) and the Mustangs (from Gooi) (1976), e.t.c.

After the split-up of the Outsiders, Wally Tax formed the band Taxfree, with fellow-Outsider Leendert Busch (drums, later in OPMC) & Jody Purpora (vocals, guitar, keyboards, also solo). In 1970, they left for the USA, recruited David Oliphant (guitar) and Ray Cordell into the group, and made an LP. On this record, John and Richard Davis (bass, well-known session player) can also be heard.  In 1971, Taxfree disbanded, after which Wally got back together with Bamboule in 1972.  NB: the LP was recorded at New York's Electric Ladyland studios.