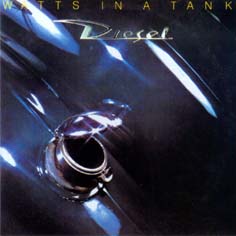 Diesel evolved from Concrete, a studio project of drummer Pim Koopman (ex-Kayak) and guitarist Rob Vunderink (ex-Hammer). Rob got in touch with his ex-Hammer bandmate Mark Boon (guitar) who was staying in California after his last band Stamp 'n Go had broken up. The first Diesel line-up was completed by ex-Hammer bass player Frank Papendrecht. The quartet worked together as studio musicians for Pim Koopman productions for the vocal duo Maywood on hits like "You Treated Me Wrong" and "Late At Night". Diesel's debut single, "Goin' Back To China", written by Pim and with Rob on lead vocals (all four members were vocalists), was a moderate hit in The Netherlands (#28 in 1979) and also scored internationally. In Japan they reached #4, but a Japanese cover version got to the #1 spot.

The second single was Mark Boon's "Down In The Silvermine", also reaching #28. The band recorded the album "Watts In A Tank" and released the single, "Sausalito Summernight" (#33 in 1980), but then Mark Boon and Frank Papendrecht quit to join Meike Touw's Tutti Frutti. Diesel got in Hugo de Bruijn (ex-Ocean and Beau Boy) on guitar and Wijnand Ott on bass. Then a strange thing happened: "Sausalito Summernight" (written about Boon's California trip) had been picked up by small US label Regency and started getting airplay in North America. When the single reached #1 in Canada, it was clear the band had to cross the ocean to tour. They got Mark Boon (who was in Vitesse at the time) back into the fold instead of Hugo de Bruijn. For touring purposes Pim Koopman (who suffered from asthma attacks) was replaced by young drummer Kim Weemhoff (ex-Ducks Nightmare, later with Mathilde Santing), but that turned out to be just a way of getting rid of Koopman. They got in Bas Krumperman (g, ex-Bruno Basta) as 5th member. The line-up of Vunderink, Boon, Ott, Weemhoff and Krumperman toured North America in the fall of 1981 for six weeks with "Sausalito Summernight" reaching #25 in the Billboard Hot 100 in 1981. It got the band a distribution deal with Atco records plus a $100,000 advance.

Upon their return from America, the band started recording their follow-up album, "Unleaded". But the project was doomed from the start. First drummer Kim Weemhoff quit and the album was completed with session drummers Roger Wollaert and Ronald Zeldenrust (explaining why there's a drummerless quartet on the sleeve picture). Then it appeared Regency boss Lloyd Segal had disappeared with their royalties and the Atco advance. When "Unleaded" came out in the summer of 1982 after a lot of financial and production hassles, the album was a disappointment. It suffered from weak song material and lacklustre production (by American Steve Yelick). Also the band didn't have another hit single up their sleeves they so desperately needed to sustain their American success.

In the summer of 1984, Leen Barbier left to work as a recording engineer. He was replaced by TWO new members: Jan Loomans (v/g, ex-Loomans Brothers) and Henk Hager (v/g, ex-Rollercoaster and The Cast) making the band a six-pack. Yet soon after the release of "Sounds Of The 60s", Wijnand Ott was ousted, so the band reverted back to a five-piece. This line-up recorded one more single, "Stormy Waters", but due to lack of success Diesel disbanded for the first time in the summer of 1985. Mark Boon joined the Margriet Eshuijs Band, Andrť Versluijs went to Waanzin. Ronald Oor later resurfaced in I've Got The Bullets.

In 1988, a new Diesel line-up was formed: Rob Vunderink (v/g), who'd been expelled from the USSR, Pim Koopman (v/d), Andrť Versluijs (v, b) and newcomer Jeroen Englebert (v/kb). The band had a small hit with Pim Koopman's "Samantha", but when the follow-up "Colorado" flopped, Diesel disbanded again.

In 1994, Andrť Versluijs started playing together with Henk Hager and drummer Thomas Kroon in the Clearwater Revival Band. In the studio they were joined by Mark Boon. The next year another ex-Diesel member, Rob Vunderink, replaced Henk Hager, who would crop up in The Buffoons in 2006. Vunderink, Kroon and Versluijs were joined by Otto Lenselink (v/g) and changed their name to VanHoo. Then they got Pim Koopman in on keyboards. In 2000, this line-up recorded an album called "On The Rocks" for Red Bullet, who released it as a new Diesel album (including "Sausalito Summernight" on the CD version). When Pim Koopman and Rob Vunderink left to concentrate on Kayak early 2001, once again Diesel dissolved.

In 2005, the original 1979 line-up of Vunderink, Koopman, Boon and Papendrecht played a one-off charity gig for the Asian tsunami victims.

This was followed by the announcement that the band would get together on a permanent basis with Werner Cornand (ex-Personnel, Henk Westbroek's Consorten and Orkater) replacing Frank Papendrecht (who was busy with Kadanz), but, apart from one concert in April 2007, no gigs followed. The history of Diesel came to a dramatic end when in November 2009 original members Frank Papendrecht (18th November) and Pim Koopman (23rd November) died of heart failure, both aged 56.

Rollercoaster was a power-pop group from the Utrecht area that evolved from The Clouds, led by the Stuiver brothers Paul (v/g) and Cok (b/v). In 1979, they were joined by Henk Hager (v/g, ex-909) and Tim Rijken (d). In March 1980, they released their first single - a cover of The Beatles' then-unreleased "Love Of The Loved" - in a limited edition of 500 numbered copies financed by the Beatles Unlimited magazine. They were then picked up by Torso Records (the label that also had The Rousers on their roster) for whom they recorded 4 sides which were ultimately never released due to a disagreement within the band over another deal they were offered by Bert Vegter (manager of Teaser and Turbo). Vegter was starting his own record label, Pure Gold Records, and wanted to re-record "(You Should) Forget That Girl", the B-side of their first single. In the fall of 1980, this argument led to the departure of Henk Hager who formed The Cast with two ex-members of Holland (Hanno Gerritse and Fred van de Berg) and would join Diesel in 1984.

Rollercoaster recorded the second single as a trio, but it failed to chart. They continued for a while with subsequent replacements for Hager but split early 1982. Tim Rijken then formed The Few; the Stuiver brothers left the music business.